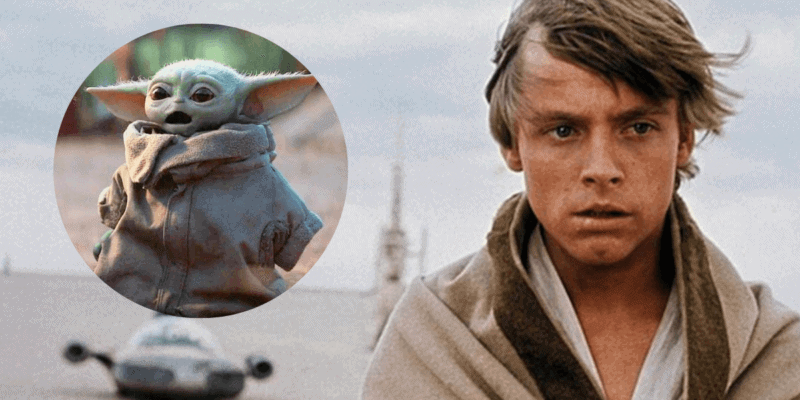 Star Wars has had a rebirth since the overwhelming success of The Mandalorian on Disney+. Now, Lucasfilm has announced a slew of brand new shows coming to Disney+ based on the Star Wars franchise. If you are a Star Wars fan, now is the time to get a Disney+ membership if you haven’t already pulled the blaster trigger.

Previously, we reported that there is a strong possibility Luke Skywalker will be receiving his own series on Disney+. If this comes to fruition it could shed light on the fate of Grogu (AKA The Child AKA Baby Yoda), which is something many fans are anxious to learn!

Let’s recap what happened on the final episode of The Mandalorian, Season 2 so we know where the possible storyline would pick up for a Luke spinoff series:

Din Djarin says a tearful goodbye to Grogu as he hands him over to Luke Skywalker who has come to the aid of the Mando and the rest of the team as they were pinned down by a hoard of Dark Troopers. Grogu is hesitant to go to Luke Skywalker as he will miss his father figure Din, but eventually with some coaxing by R2-D2 he is persuaded to join the Jedi. It is implied that Luke felt Grogu reaching out through the force which took place in a previous episode, and that is how Luke came to find him. Luke with Grogu in his arms and R2-D2 at his side leave Din and the rest of the team as a door slowly closes in front of them, thus ending Grogu’s story arc…. or has it ended?

This is purely speculation as Disney/Lucasfilm have not confirmed the series or any details surrounding the rumors of a series.

A possible plot for this rumored series based on the continued adventures of Luke Skywalker could be about Luke, alongside Grogu, starting his new Jedi Academy to train the next generation of Jedi in the ways of the Force. Luke’s creation of a Jedi Academy is part of the existing Star Wars canon and is showcased in exposition and flashbacks in the latest Lucasfilm and Disney Skywalker Saga trilogy films — Kylo Ren (Adam Driver) destroys the Academy, as a matter of fact.

You can watch this flashback which shows Luke explaining that not only did he have many students, but he had already constructed a new Jedi Temple.

A series filling in this new blank, following Luke as he continues to adventure through the galaxy in search of new students as well as constructing a Jedi temple would be interesting. Especially now, as the viewer knows Grogu is with Luke — at least for the time being. We could see Luke train Grogu into a full-fledged Jedi, and find out if Grogu escaped the massacre of the Jedi Temple shown in the above flashback.

Additionally, the series could focus on a young Kylo Ren and his journey to the dark side, including how he came to meet Supreme Leader Snoke. Snoke was such a mysterious character in the final trio of Skywalker Saga films, it would be interesting to revisit, perhaps as the main antagonist of the series, trying to stop Luke from rebuilding the Jedi.

You can read more of how Luke Skywalker, Kylo Ren, and Grogu will shape the continuation of the Star Wars universe here.

It would be expensive and impractical for a new series based on Disney+ to rely entirely on CGI to recreate Mark Hamill’s image as Luke Skywalker. While they did employ the use of this technique for the final episode of The Mandalorian Season 2, fans believe a better alternative is out there.

After fan art showing Marvel star Sebastian Stan as Luke Skywalker, the internet was set ablaze with the fan casting! The actor shares a striking resemblance to Mark Hamill.

It does not have to be Sebastian Stan who brings back Luke Skywalker, but it shows that fans are receptive to recasting a young Luke Skywalker in order to explore more of the story.

Sebastian Stan is currently working on Marvel’s The Falcon and the Winter Soldier series set to debut on Disney+ in 2021.

So what do you think? Would you be interested in watching a Disney+ series following Luke as he travels with Grogu though the galaxy in search of more Jedi to train? Let us know in the comments!