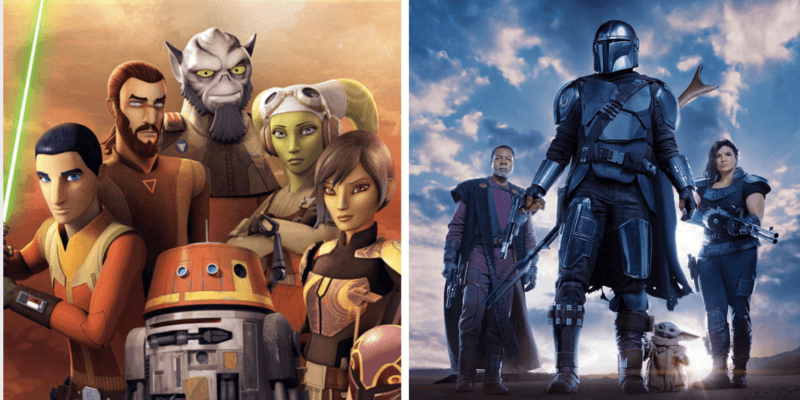 Before the sensation that is The Mandalorian, Dave Filoni was the writer and director of Star Wars: The Clone Wars and an executive producer of Star Wars Rebels.

Some of his animated characters — including fan-favorite Ahsoka Tano and beskar armor-clad Bo-Katan Kryze, alongside her Nite Owl Mandalorian warrior crew — have already appeared in The Mandalorian.

But, is it possible we’ve already met another Star Wars Rebels character in The Mandalorian and didn’t even realize it?

CinemaBlend has shared an intriguing theory about Sabine Wren, who Rebels fans know originally gave the Darksaber to Bo-Katan after finding it among Maul’s belongings. As the theory goes:

[there is a particular Imperial Comms Officer, shown above] who has appeared on screen with speaking roles more than a few times. Take a look at the character below from a recent scene in “The Tragedy”, and read on to see why some are wondering if she may be Star Wars Rebels’, Sabine Wren.

That Comms Officer is played by actress Katy O’Brian, who has been seen in shows such as Z Nation and Black Lightning. One interesting note about O’Brian (via Movieweb) is that she’s a trained martial artist, so to see her in a role as an imperial officer where fighting isn’t typically a pre-requisite is a bit strange. What’s even strangre is she’s an unnamed character who frequently keeps getting small speaking roles throughout the series, and some are beginning to wonder why.

This particular Comms Officer has specifically been featured multiple times throughout the season, first in Chapter 12: The Siege, again in Chapter 14: The Tragedy, and finally, in the finale episode, Chapter 16: The Rescue. This does seem odd for a character who isn’t serving a “higher purpose” — to quote Bo-Katan’s dig at bounty hunter Din Djarin (Pedro Pascal) in the aforementioned Chapter 16.

Furthermore, hiding an animated series star like Sabine Wren in live-action plain sight for nearly the entirety of The Mandalorian Season 2 is absolutely something executive producers Jon Favreau and Dave Filoni would do. The duo love surprises — they hid Grogu’s (AKA The Child AKA Baby Yoda) existence for nearly a year leading up to Season 1 of the hit series and, just recently, hid that wild cameo until the Season 2 finale aired on Disney+ on December 18.

Now, looking ahead to The Mandalorian Season 3 — with Din Djarin the wielder of the Darksaber and de facto ruler of Mandalore — we can assume the black-bladed lightsaber will continue playing a key role, so it would serve to reason that Sabine will show up, perhaps sooner rather than later.

Plus, as CinemaBlend points out, the character fits into the overarching storyline that is being crafted for Lucasfilm’s interconnected trio of shows — The Mandalorian, Ahsoka, and Rangers of the New Republic:

Thrawn was last seen on Star Wars Rebels, in which sucked away into hyperspace by a Purrgil alongside Sabine’s former crewmate, Ezra Bridger. Sabine committed to finding Ezra at the end of the show, so wouldn’t it be smart of her to infiltrate the remnants of the Empire in an attempt to locate Thrawn and potentially discover Ezra’s whereabouts in the process?

It will not be surprising in the least if an increasing number of animated Star Wars characters appear in live-action to gear-up for the climactic streaming finale of these three series, announced by Kathleen Kennedy at The Walt Disney Company’s Investor Day event.

Interestingly enough, the Star Wars Fandom Wookieepedia has already given this seemingly random Imperial Comms Officer her own page.

It describes her as:

A human female comms officer served in a Galactic Empire remnant [AKA Imperial remnant] led by Moff Gideon [Giancarlo Esposito]. Around 9 ABY, she liaised with an informant on tracking the Force-sensitive infant Grogu and brought news to Gideon when a tracker had been placed on the gunship Razor Crest where the child was being kept.

What do you think? Could Favreau and Filoni be setting The Mandalorian’s viewers up for another surprise? Do you think Moff Gideon’s Comms Officer is actually going to be introduced as Sabine Wren in the upcoming season of Mando?