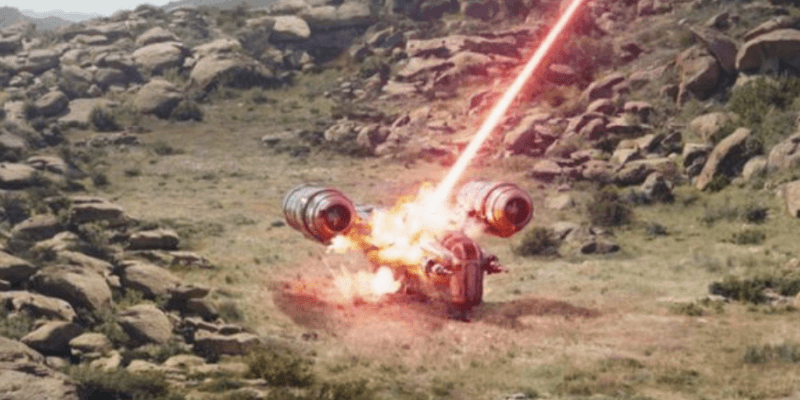 As if The Mandalorian Season 2, Episode 6 (Chapter 14: The Tragedy) wasn’t dramatic enough with Grogu getting stolen by Moff Gideon’s (Giancarlo Esposito) darktroopers and the triumphant return of bounty hunter Boba Fett (Temeura Morrison), now the internet is abuzz with controversy about Hasbro’s latest Star Wars toy.

Den of Geek shares these details:

[Hasbro Toys via HasLab crowdfunding] unveiled and successfully funded its second too-pricey-for-retail mega-vehicle: Din Djarin’s signature ship, the Razor Crest. The funding of the toy, which followed last year’s success with the massive Jabba’s Sail Barge (The Khetanna), will bring to life the magnificent starship, presented in-scale for the 3.75” scale action figures, specifically for those willing to pay the $350 price tag. As it turns out, around 28,000 hardcore toy collectors were willing to pay.

Now, those 28,000 Mandalorian fans and toy collectors are less than thrilled — the Razor Crest met an untimely end on Tython, with nothing left but Grogu’s ball and Djarin’s beskar spear, which will undoubtedly be instrumental in defeating the Darksaber before the end of Season 2.

Many of the people who funded the Razor Crest model [pictured below] have now taken to social media to express their disappointment. As Den of Geek points out:

Hasbro often coordinates its toy plans with creative personnel from Star Wars shows and films during the developmental phases to ensure accuracy, which might lead some irate collectors to believe that the company already knew the ship’s fate as it was collecting major money from fans.

Here are some fan reactions.

Twitter user Greg, who clearly did not participate in the Star Wars crowdfunding project himself, shared an “I would like a refund” GIF accompanied by the caption:

My Dad backed the Hasbro Pulse Razor Crest and was a little disappointed when he saw the newest episode ?

Kevin Powers shared some legitimate business problems that could arise from the destruction of the Razor Crest, writing:

Jeff shared this unfortunate image of the Razor Crest getting blown up and the caption:

To everyone who bought a RazorCrest [sic] from Lego or Hasbro

@nerdist To everyone who bought a RazorCrest from Lego or Hasbro pic.twitter.com/1qHwlUM28P

On the bright side of things, the Hasbro Razor Crest set — which comes with figures of Din Djarin, The Child and his floating pod pram, and a Jawa Elder — is now a rare collector’s item that, as Den of Geek puts it, “serves as a spectacular snapshot of the acclaimed television series during the splendor of its cultural height.”

Where do you fall in the Razor Crest controversy? Do you think Hasbro was dishonest making a version of a ship they allegedly knew would be destroyed or is it a super cool Star Wars collectible now?