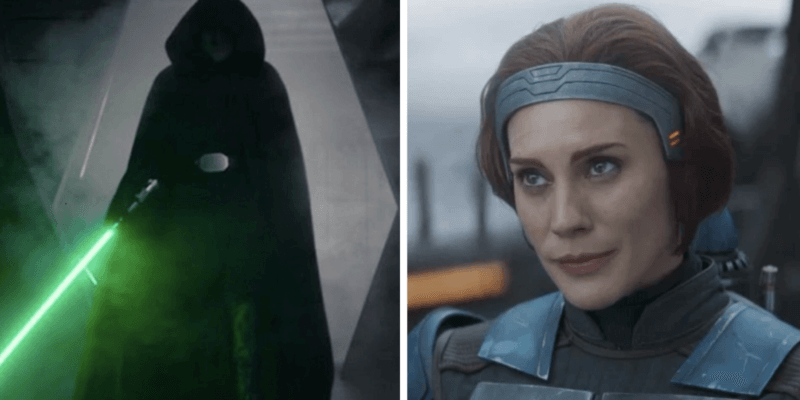 Kryze met Din Djarin (Pedro Pascal) and Grogu (AKA The Child AKA Baby Yoda) while the duo were searching for a member of the Jedi Order who could assist the foundling. Kryze was on her own quest to find Moff Gideon (Giancarlo Esposito) and the Darksaber.

Her goal? To fairly win back the black-bladed saber in battle and ultimately retake her home planet, Mandalore, avenging her sister Duchess Satine Kryze’s death.

The episode, directed by Peyton Reed, saw a surprising cameo appearance — none other than iconic Jedi Knight Luke Skywalker!

Fans were shocked — and thrilled — by the surprise appearance, which featured a CGI de-aged version of Mark Hamill circa Star Wars: Episode VI – The Return of the Jedi (1983).

On set, however, actor Max Lloyd-Jones served as a body double for the Jedi Knight’s return. Sackhoff recently spoke to The Sith Council and shared:

“I didn’t know [it was Luke] until I saw it with you guys…They didn’t tell us. There was an actor there with dots on his face.”

The dots, of course, were to assist the Mandalorian visual effects team who later replaced Lloyd-Jones’s face with Hamill’s.

Sackhoff continued, sharing that she had an inkling of who the character was, but couldn’t believe the cast wouldn’t have been informed of such a major cameo within the Star Wars franchise:

“I mean, kind of. But at the same time, I thought to myself, ‘They would have let us know that.’ You know, they said… Who did they say it was? I think Robin [Gadsby] knew who they said it was, but it was a complete red herring. So we didn’t know. I knew it was a Jedi. I knew it was an X-Wing. So you start to put things together, but you don’t know.”

At this time, neither Bo-Katan nor Luke have been confirmed for The Mandalorian Season 3 or any of the show’s numerous spinoffs — Ahsoka, Rangers of the New Republic, and The Book of Boba Fett.

It seems likely, however, that the unresolved Darksaber storyline will continue well into The Mandalorian Season 3.

Furthermore, with rumors running rampant that Ahsoka — featuring Rosario Dawson as Ahsoka Tano — will serve as a live-action Rebels sequel, it would be unlikely for Bo-Katan Kryze to not be involved in some fashion as The Mandalorian saga moves forward on Disney+.

Do you hope to see Jon Favreau and Dave Filoni invite actress Katee Sackhoff back for more Mandalorian appearances?