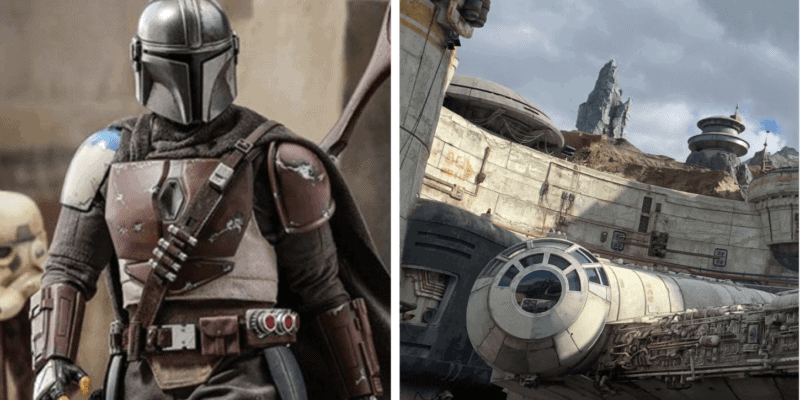 If you’re a Star Wars fan, you don’t need me to tell you that everything — literally, everything — in the Star Wars universe is somehow connected. The deep backstories and far-reaching story arcs are part of what makes the franchise so great.

With brand new characters like Oga Garra, Bubo Wamba, and Vi Moradi, plus a host of merchandise collections in Target and other stores, Star Wars: Galaxy’s Edge allows fans to connect to the Star Wars story like never before.

Now, thanks to Twitter account Bioreconstruct, we have discovered a brand new connection between Galaxy’s Edge at Disney’s Hollywood Studios and the rest of the Star Wars canon universe. As it turns out, a major piece of memorabilia from The Mandalorian can be found at the Florida theme park — and, no, it’s not Ahsoka Tano’s lighsaber duo (although that would be undeniably cool).

Speaking of X-wing, the blue one in DHS was used in The Mandalorian Season 1 before it was shipped to SWGE

Speaking of X-wing, the blue one in DHS was used in The Mandalorian Season 1 before it was shipped to SWGE. https://t.co/0ykEwpbvI4

This isn’t the first time something from Jon Favreau and Dave Filoni’s The Mandalorian has appeared at Star Wars: Galaxy’s Edge. For awhile, Dok-Ondar’s Den of Antiquities housed not only a Mandalorian Mythosaur skull, but Din Djarin’s helmet and rifle!

Almost a year ago X-wings flew at Star Wars Galaxy’s Edge DHS. For a few nights staring with the Dec 4, 2019 Grand Opening. They could even be seen from EPCOT.

Almost a year ago X-wings flew at Star Wars Galaxy's Edge DHS. For a few nights starting with the Dec 4, 2019 Grand Opening. They could even be seen from EPCOT. pic.twitter.com/HYza3Yl7qy

Next time you visit Star Wars: Galaxy’s Edge, are you going to be on the lookout for Mandalorian memorabilia as you enjoy cocktails at Oga’s Cantina, build your very own astromech droid at the Droid Depot or construct a legacy lightsaber at Savi’s Workshop?

What do you think about the connection between the Star Wars: Galaxy’s Edge X-wing and The Mandalorian? Do you suppose Imagineering has dreamed up a reason for this particular X-wing fighter to end up on Batuu?