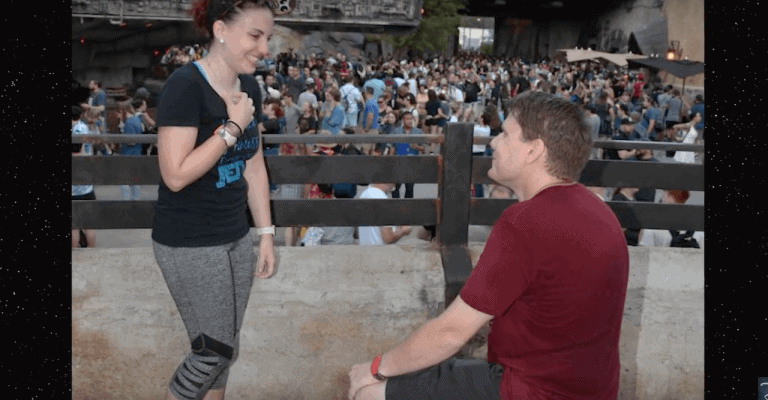 She loves him, he knows…so he put a ring on it! A “Star Wars”-loving couple recently became arguably the biggest fans out there when they got engaged at Galaxy’s Edge on the land’s opening day at Walt Disney World.

This couple’s engagement proves that even Disney magic can happen on Batuu. Robert Trevelyan of Lake City, Florida, proposed to his girlfriend, Megan Bender, with the Millennium Falcon as the backdrop, and it was an occasion that would make Leia and Han Solo jealous!

“Well he proposed to me in front of a big hunk of junk, because I love that hunk of junk,” Bender shared, jokingly.

“And I wanted to make it something that’s going to be just memorable and that’s it–opening day, Galaxy’s Edge,” Trevelyan said. “The Millennium Falcon’s important to us and this is a day that we’re definitely not going to forget.”

As you can see in the video, Bender was turned around looking at the Millennium Falcon (and she was wearing Chewbacca and Porg-themed ears, fit for the occasion) when Trevelyan got down on one knee and popped the question.

“I’ve been waiting for this moment for a long time, and now that it’s finally happened I’m just so excited,” Bender continued. “He has truly made me feel like the luckiest girl in the world right now.”

“I’m just amazed that it was able to come together as perfectly as it has, and so much help from the Cast Members here. It was just amazing,” Trevelyan said. “Next, I’ve got to find a black Khyber crystal, so I’m going to go test my luck with that one!”

Watch the adorable video of Bender and Trevelyan’s engagement below, complete with PhotoPass photographer assistance, the Millennium Falcon, and hundreds of “Star Wars” fans on the opening day of Galaxy’s Edge:

But Trevelyan and Bender aren’t the only happy couple to get engaged in front of the Millennium Falcon. Another pair of “Star Wars” fans also got engaged there recently! Check out this adorable photo, shared by Disney Weddings:

Want to visit Star Wars: Galaxy’s Edge for yourself, to get engaged or just to pilot the fastest hunk of junk in the galaxy? Click here for a free vacation quote from the Authorized Disney Vacation Planners at Academy Travel to have your chance to visit a galaxy far, far away.

Where is your dream Disney proposal spot? Let us know in the comments!