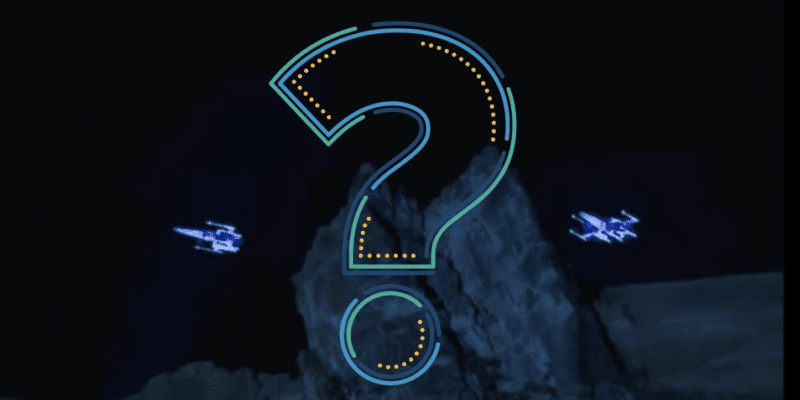 Although we don’t have a pricing sheet handy, we imagine that developing and building a Star Wars X-wing Starfighter doesn’t come cheaply.

And yet, that’s exactly what The Walt Disney Company paid Boeing to do last year when Star Wars: Rise of the Resistance opened at Walt Disney World Resort in Orlando, Florida.

The highly-anticipated Star Wars: Galaxy’s Edge ride opened to Guests on December 5, 2019, and the X-wings flew over Disney’s Hollywood Studios the night before during a dedication ceremony. Disneyland Resort’s version of the ride followed on January 17, 2020, but the X-wing drones were — quite strangely — not present for its debut.

At the time, Boeing confirmed their involvement in the project. The Drive reported these details, which they received directly from Boeing communications official Alison Sheridan:

“We can confirm that those were Boeing aircraft that flew last night at the Rise Of The Resistance dedication, and we were excited to be part of their event, but that’s all we’re sharing right now.”

The Drive went on to write:

It is a very novel application of one of Boeing’s still experimental future-facing aerospace technologies. In fact, flying a pair of CAVs in a highly modified form at a very high-profile event like this that is associated with one of the world’s largest brands and entertainment franchises speaks to the stability and maturity of the CAV design.

The collaboration between Disney’s Imagineering team and Boeing is an interesting one, to say the least. It will be great to hear the backstory about how this idea came to be, how the platform was selected, and how its X-Wing structure was added and flight tested. Hopefully, we will have those details in the not so distant future.

Related: Get an X-Wing’s Perspective of Star Wars: Galaxy’s Edge

Oddly, however, additional details never arrived from Boeing or Disney — neither in the “not too distant” nor very distant (i.e. right now) — future. It has now been over a year since anyone saw hide-nor-hair of the two modified X-wing drones and, as previously stated, the Star Wars X-wing flyover never occurred at Disneyland Park’s Star Wars: Galaxy’s Edge.

The Boeing CAV aircraft design that was used as the foundation for the Disney’s Star Wars project is described as:

The Boeing Cargo Air Vehicle is an unmanned, fully electric cargo air vehicle. It was made possible by an investment of Boeing HorizonX Ventures.

A photo of an unmodified CAV can be seen above. The aircraft could also potentially be used as the base for a tie fighter if Disney ever felt compelled to bring the Death Star hangar to life as a walk-through experience for Guests who enjoy all-things-Empire.

It’s time for Disney to bring back the X-wings.

Assuming Disney’s X-wings aren’t at Area 51, it’s time for them to return to Star Wars: Galaxy’s Edge. Seeing legitimate X-wing designs, like those flown by Star Wars icons Luke Skywalker and Poe Dameron, is an undeniable treat for any fan and there’s no reason for Disney Imagineers to have worked through this entire undertaking alongside Boeing only to use the vehicles once.

Furthermore, the possibility of watching X-wings overhead only adds to the authentic experience Imagineers are always trying to enhance on Batuu.

There are a few upcoming occasions for which X-wing flyovers would be the icing on the cake for the Star Wars fandom and Disney Parks Guests at large.

First, the reopening of the Disneyland Resort theme parks — which may be closed for over a year by the time it finally reopens amid the pandemic — would be an excellent occasion on which to pull the X-wings out of storage (wherever they happen to be.)

Since Disneyland’s Star Wars: Galaxy’s Edge Guests never got to experience the X-wings when Rise of the Resistance opened in Anaheim — for whatever unknown reason — this would be a nice gesture on Disney’s part as well.

The Opening of the Galactic Starcruiser Hotel

Walt Disney World officials have stated that the opening of the Star Wars: Galactic Starcruiser Hotel is a “priority project” — one that is still set to occur ahead of the theme park’s 50th Anniversary Celebration in 2021.

Having an X-wing flyover to mark the opening of this first-of-its-kind Disney Resort would be amazing for Guests, both on Batuu and on their way to board the Halcyon to journey to a galaxy far, far away.

The Theatrical Release of Rogue Squadron

At last week’s Walt Disney Company Investors Day event, Lucasfilm President Kathleen Kennedy shared that the next Star Wars movie will hit theaters in 2023 and will be directed by Patty Jenkins.

The film is set to follow the adventures of an entirely new set of Star Wars characters, who just happen to be Rogue Squadron fighter pilots.

What better way to celebrate the release of the first in a new era of Star Wars films following the Skywalker Saga than with an X-wing flyover at Walt Disney World or Disneyland?

Did you get to see the X-wings at Walt Disney World? Where do you think they are now and when do you think Disney should bring them back? We think the New Republic would definitely approve of the X wing fighter ship duo returning sooner rather than later.