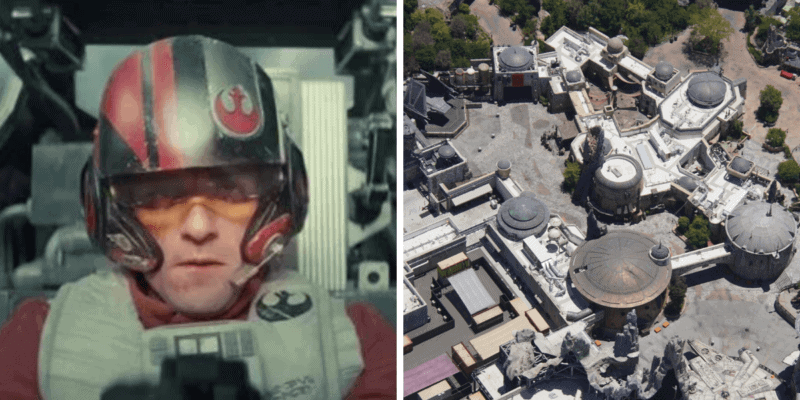 While Walt Disney World moves ahead with its phased reopening of the theme parks, the Disneyland Resort in Anaheim, California, still sits with Disneyland and Disney California Adventure closed. But that has not stopped ambitious photographers from taking to the skies and catching a glimpse of the Happiest Place on Earth in its current slumber.

While one can simply look at this as being another picture of a theme park taken from a plane, helicopter, or drone, what we have here is the same view Poe Dameron would have coming to land in his X-Wing.

Imagine coming out of lightspeed, descending through the clouds, and seeing the Black Spire Outpost and the entirety of Disneyland open up to you as you try to negotiate permission to land.

Aerial view of area surrounding Rivers of America in Disneyland. (July 10) Zoom in to spot familiar sights, such as the X-wing. pic.twitter.com/YSPQLM795f

Coming around for your approach, you get a glimpse of Sleeping Beauty Castle and the landmarks of neighboring Frontierland, Fantasyland, and Tomorrowland.

Zoom into this July 10 aerial photo and remember the winding pathway behind Big Thunder Mountain in Disneyland.

The Disney's Hollywood Studios version of Star Wars Galaxy's Edge does not have an equivalent routing through the building with the red banner, bottom center. pic.twitter.com/3iEry1ZKS0

As you approach again from the west, you first fly over the newest attraction, Star Wars: Rise of the Resistance, and can see a fellow X-Wing already parked below.

Star Wars: Galaxy’s Edge and the rest of Disneyland park was originally scheduled to reopen in Mid-July along with Disney California Adventure park, and resort hotels, in time to celebrate Disneyland’s 65th Anniversary on July 17. However, that reopening has been delayed with no new reopening date announced. Downtown Disney District, however, was able to reopen on July 9.

Wondering when you can get back to Disneyland and start planning your next trip? Our friends at Academy Travel are here to help. Their agents remain constantly up-to-date on all of the latest park information from change and cancellation policies to hotel reservations. Click here to learn more.

Comments Off on Get an X-Wing’s Perspective of Star Wars: Galaxy’s Edge