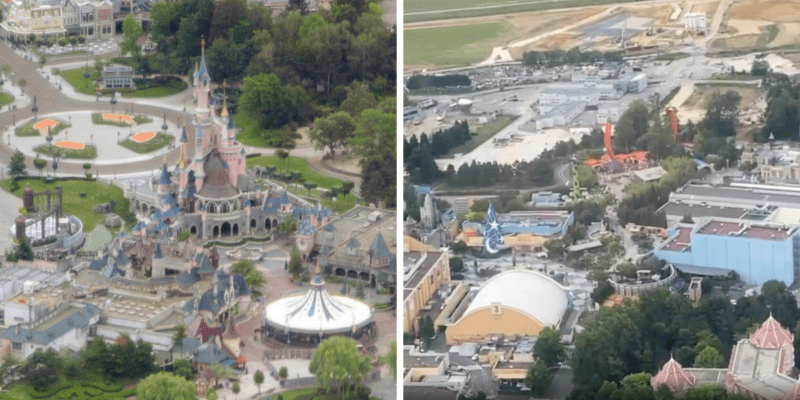 Over the past few months, Inside the Magic has shared aerial footage of both the Walt Disney World Resort and the Disneyland Resort in Anaheim, California as they sat empty due to the global pandemic.

Now, we can add aerial footage of a third Disney resort to our archives.

On June 7, Disney fanatics GuiGui and Stephanie (on Instagram as @papageekendebardeur) took a flight path over Disneyland Paris to give people a whole new perspective on what is widely considered the most beautiful park in the Disney family.

But most importantly, fans get a peek at the progress being made on the upcoming Frozen-themed land under construction at Walt Disney Studios Park.

He shared a video of his adventure–which is almost nine minutes long–with a caption that translates from French to English as:

#DisneylandParis by plane ✈️ We don’t know yet when @disneylandparis ? is going to reopen its doors but we are so impatient that we went to take our dose of #Mickey ? We brought you some pictures ? I hope you like it ? So who is your favorite #Disney character? If you know me, you know for me ???‍♀️ #dlp #dlpfan

Regarde (Check it out):

These fans give us the entirety of their adventure from meeting their little plane at the hangar to recapping their adventure back on the ground. All of the Disneyland footage can be found between 3:00-4:00.

Their flight path brought them almost directly over the theme park, passing the resort hotels, over the Disneyland Paris Hotel, and into the park. The Disneyland Train Station which takes Guests to and from Paris can be seen off to the right as well. Like Peter Pan, they soar around the park capturing iconic landmarks like Sleeping Beauty Castle, Space Mountain: Mission II, and Big Thunder Mountain.

But then they moved on to Disneyland Paris’s second park, Walt Disney Studios Park, and behind the buildings that house attractions like Ratatouille: The Adventure, as well as Tower of Terror, and RC Racer, our adventurers give us a glimpse at the Frozen-themed land currently under construction.

Related: Golf at Disneyland Paris to Reportedly Resume This Month

What they can see is still early stages of construction. The land has been cleared away and some mysterious buildings are occupying most of that land. Any obviously-Frozen buildings are still missing from the picture at this time.

While much excitement has surrounded the expansion project, it has not been unaffected by the global pandemic. Inside the Magic reported that construction of Disneyland Paris’s Frozen land was halted at the end of April 2020 as the park remained until further notice. No further updates have been made on the matter.

When do you think Disneyland Paris is going to reopen? Let us know in the comments!