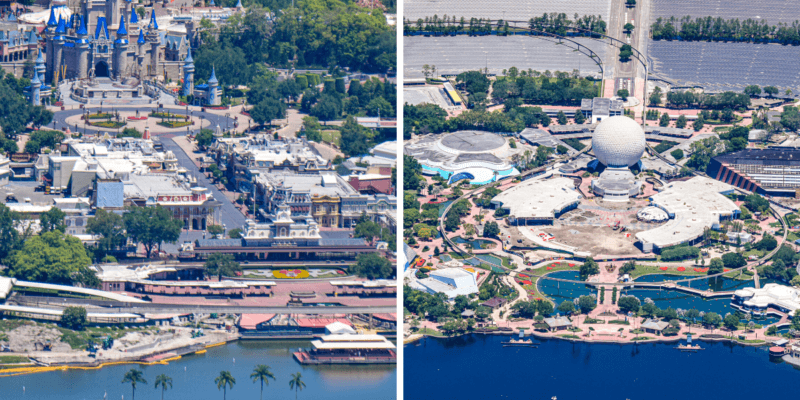 As the theme parks of the Walt Disney World Resort sit closed, the only question that comes second to “When will they reopen?” is “What do the parks look like empty?”

Here at Inside the Magic, we’ve endeavored to show you a new side of the Most Magical Place on Earth and give you a glimpse of the parks the way most guests never see it. One adventurous pilot and photographer Jonathan Michael Salazar has given us a flying elephant’s eye view of an empty Walt Disney World and has delivered some jaw-dropping pictures. Thank you Jonathan for sending us the images!

So let’s go in and take a look!

Starting with the first and still flagship Walt Disney World theme park, Salazar takes us over the Magic Kingdom, showing us Cinderella Castle standing before an empty Main Street with construction cranes nestled around her. We see New Fantasyland, Tomorrowland with the TRON Lightcycle Power/Run coaster under construction, and we see the Transportation and Ticket Center empty of guests, monorails, ferry boats, and cars.

Then we flew over EPCOT, and we got a brilliant view of the construction happening there in Future World and the main entrance. Walt Disney World’s largest parking lot sits eerily empty and the monorail track stands unused.

Moving on to Disney’s Hollywood Studios, we look in on Hollywood Blvd., Sunset Blvd., and Echo Lake, as well as Toy Story Land, and Star Wars: Galaxy’s Edge.

We then head for Disney World’s largest theme park, Disney’s Animal Kingdom. We get a bird’s eye view of The Tree of Life, Pandora: The World of Avatar, Expedition Everest, and the Harambe Wildlife Preserve.

Now, let’s go to the water parks. Disney’s Typhoon Lagoon and Disney’s Blizzard Beach are two of the best water parks in the state of Florida, and each offers a totally different experience. If you’ve never been to a Disney World water park, you can tell the dissonance simply by these pictures here.

Now on to Disney Springs for some shopping and dining.

Last but not least, we check out the Walt Disney World Resort Hotels, sitting proudly yet empty.

As of May 4, 2020, there is still no reopening date set for Walt Disney World. However, plans are beginning to be set into motion for the reopening of Disney Springs at some level of capacity.

Comments Off on Take an Aerial Tour of Empty Walt Disney World with These New Images!