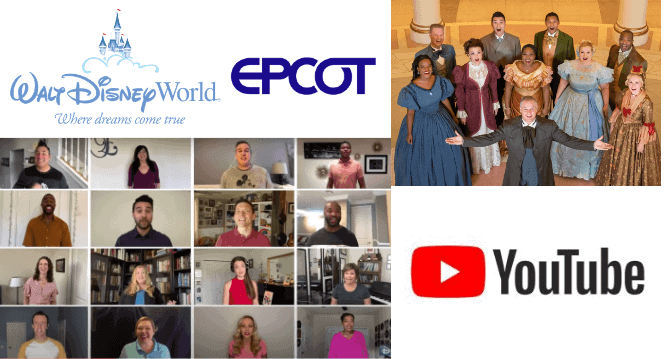 The Voices of Liberty are one of our favorite EPCOT attractions, as they charm park guests with their beautiful songs and patriotic melodies.

This acapella group is known for their close harmonies and traditional outfits. They tend to sing a mixture of patriotic melodies and classic Disney tunes about love and friendship.

Well, as the Disney parks are sadly out of action, EPCOT’s voices took to Youtube to record a very special song for the guests they’re longing to see again.

Disney fans around the world will be thrilled to listen to the Voices of Liberty’s special performance, despite the EPCOT park (like all other Disney theme parks and resorts) being closed right now.

Let’s take a listen to their gorgeous singing voices.

Wow. It’s like being back at Walt Disney World. You can tell each performer is giving it their all; their singing is just unmatched.

There’s nothing quite like sitting and listening to the Voices of Liberty and literally being taken on an American adventure. As a Brit, it’s amazing to be given such a beautiful look into another culture via the medium of song.

This incredible choir are a Disney fan favorite for good reason. They’re as much a part of Disney’s EPCOT as Cinderella Castle is to Disney’s Magic Kingdom, and I for one, long for the day where we can sit and listen to these magical singers again.

Every park at Walt Disney World in Orlando is special, but there’s no park like Disney’s EPCOT. These guys and the entire World Showcase attraction exemplify why. The messages of love, friendship and that WDW magic that only music can properly convey will stay with us always. No matter how dark things seem.

So thank you Voices of Liberty and thank you Disney, from all of us. Hopefully, we can get back to Orlando in time for the Christmas Season and you can serenade us with a Disney Christmas song or ten.

Oh, and if you fancy learning about British culture, stop by EPCOT’s United Kingdom Pavilion and we’ll smash some pints, talk about the weather and watch the football. Hm. Not quite as romantic.

What do you think of this performance by Disney’s Voices of Liberty? Are you craving an American adventure back at Walt Disney World? Which theme park will you visit first when things are back to normal? Let us know in the comments below.