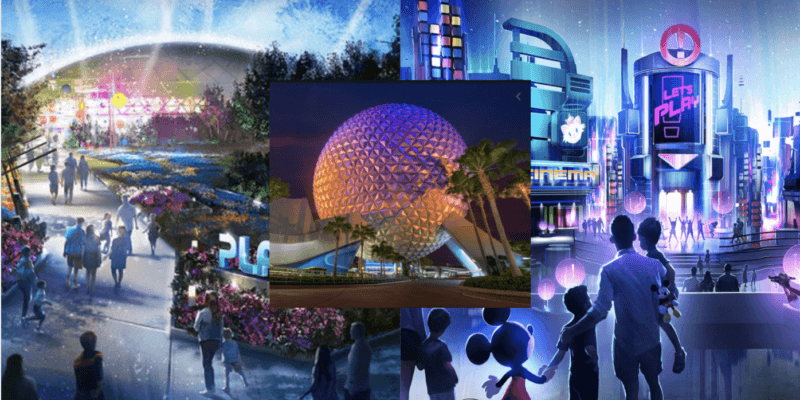 When Disney Parks executives halted construction on projects across all of their theme parks, EPCOT was impacted more than any other Disney property in the United States. EPCOT is currently undergoing a massive renovation that will alter the way Guests experience the park that Walt Disney himself originally dreamed up.

At the 2019 D23 Expo, Disney officials made several major announcements regarding the historic EPCOT reimagining. One unexpected change was the revelation that the park will soon be transformed into four neighborhoods, instead of the current two: Future World and the World Showcase.

World Showcase will remain intact, with the addition of new attractions and a potential new country pavilion, but Future World as EPCOT fans once knew it will change dramatically. When construction at EPCOT is finished, the former Future World will be 3 new districts: World Discovery (including the Play pavilion), World Celebration, and World Nature.

Now, Walt Disney Imagineering has filed permits for the Play! Pavilion that will be part of World Discovery once it is completed. The permit, pictured below, indicates that Balfour Beatty Construction will be working on “detail for set areas” in the upcoming Play! area at EPCOT park.

This area of the reimagined EPCOT will invite Disney Parks Guests to experience a playful city that is filled with immersive experiences and “hands-on activities.” Both the Play! Pavilion WDI rendering and online rumors indicate that the area will be reminiscent of The Internet in Wreck It Ralph 2: Ralph Breaks the Internet.

At the D23 Expo last summer, Disney shared some of the backstory of the new EPCOT space, indicating that visitors will be helping fashion icon Edna Mode as she quests to eliminate “uninspired style.” Younger Guests will also get to enjoy a massive water-balloon fight overseen by Huey, Dewey, and Louie.

The Play! Pavilion is going to be the perfect place for families with young children to explore all that EPCOT has to offer! Imagineers are expected to have this World Discovery section open before Walt Disney World’s 50th Anniversary Celebration in 2021. Are you excited about these new EPCOT Play! Pavilion permit filing?

What else is coming to EPCOT?

Space 2020, a restaurant that will allow Guests to experience an interstellar dining experience near Spaceship Earth at the EPCOT entrance, was originally slated to open in April 2020. A new opening date has not been announced, but is likely to be very soon after Disney World reopens.

The EPCOT World Nature pavilion will house the much-anticipated Moana attraction, “Journey of Water,” which will allow park guests to interact with jumping/moving water in a tranquil, natural setting.

In the World Showcase, numerous changes are coming, including the addition of the France pavilion’s Remy’s Ratatouille Adventure, is nearly completed and is expected to start running soon after the Disney Parks reopen.

There are also plans to add a Mary Poppins-themed area modeled after Cherry Tree Lane, where the Banks family resides, to the Great Britain pavilion.

To plan your next Walt Disney World Resort, trust the Authorized Disney Vacation Planners at Academy Travel. Get a free quote from their skilled team of Disney travel agents today!