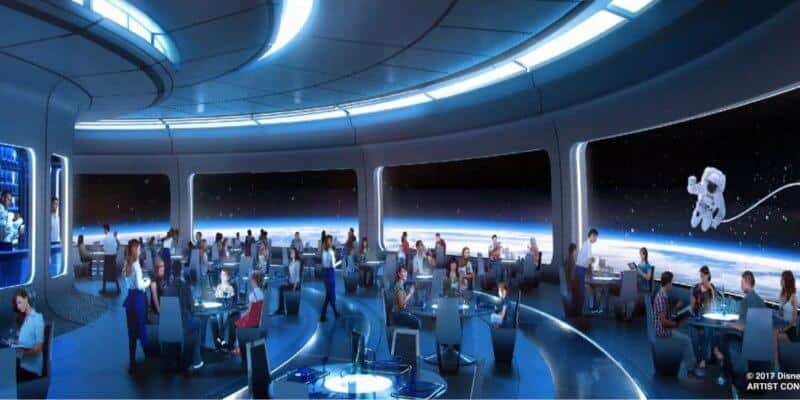 While there is yet to be an official confirmation from Walt Disney World, we have a new reason to believe that we can expect EPCOT’s highly-anticipated new restaurant, Space 220, to open as early as next month.

Totalfood.com recently published a feature article about William Welch, Founder and CEO of Studio William. The bulk of the story focuses on a man and the world that sits on the cutting edge of restaurant cutlery (pun intended). But the article mentions Welch’s current projects going on right now in Orlando with Disney.

We know magic in foodservice is rare and therefore memorable—just ask the makers of magic, the good people at Disney in Orlando, Florida. Since the budding of our partnership last spring, Studio William’s brand awareness has grown. Next month, Patina Restaurant Group (PRG) is set to launch into space with the opening of Space 220 inside EPCOT Center, creating everlasting magic in the city known for doing just that.

Welch was brought on to provide the cutlery–those out-of-this-world finishing touches–on the 375-seat space station restaurant. However, that is all the news we get in the article.

Walt Disney World has yet to mention an official April opening of Space 220. The resort hasn’t even opened the restaurant up to reservations yet. Still, it is an interesting development.

One of the many new experiences planned for EPCOT’s major overhaul, Space 220 promises to be an unforgettable immersive experience. The Living Seas with Nemo and Friends already takes guests under the sea with The Coral Reef restaurant, and The Land pavilion has the two restaurants that connect guests closer to the earth, now it’s time to complete the trifecta with an out-of-this-world culinary experience near Mission Space!

According to Walt Disney World’s website, this is what we can expect from Space 220:

Walt Disney World still has not confirmed any opening date for this new restaurant, but Inside the Magic will keep our ears to the ground and will update our readers as soon as an opening is announced.

Space 220 will be joined by other new EPCOT attractions. They include a Mary Poppins attraction at the United Kingdom Pavilion, a Ratatouille attraction at the France Pavilion and Sam Eagle’s Regal Eagle themed restaurant at the American Adventure.

Learn More: A Complete Guide To What We Know So Far About The Space 220 Restaurant

Craving a trip back to EPCOT any of the other Disney Parks? Our friends at Academy Travel can help. Backed with years of experience, Academy’s travel agents know what it takes to get you the best possible deal on your next Walt Disney World vacation for your budget. Click here to learn more and receive your free, no-obligation quote today.

Are you excited for Space 220 and everything else planned for EPCOT’s major revamp? Let us know in the comments!