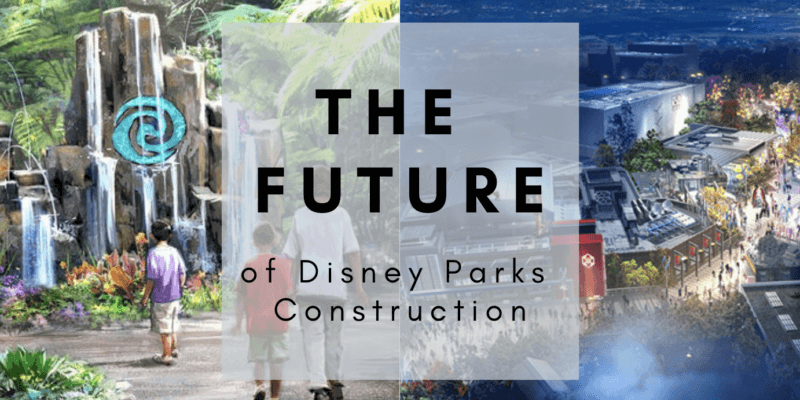 With all construction halted at both Disney World and Disneyland amid the COVID-19 closures, Disney Parks fans are wondering what is going to happen with a number of upcoming projects. This is a good question, and something that Disney officials have yet to address in-depth.

It is likely that even the Disney Parks executive team doesn’t know for sure which WDW and DLR construction jobs will continue on-track. Much will depend on how long the Disney Parks on both coasts are actually closed. With the CDC recommending no gatherings of more than 50 people until mid-May, it seems probably that the theme parks’ anticipated April 1 reopening date will be pushed back.

Here’s our take on which currently halted Disney Parks projects are likely to proceed on schedule and which will be postponed or axed altogether.

What should continue on track?

Disney World’s 50th Anniversary Cinderella Castle makeover is already underway. With this serving as the centerpiece of WDW’s Golden Anniversary celebration throughout 2021, it’s almost certain that the renovation will continue as close to on schedule as possible. We can’t wait to see the rose pink and gold hues added to the castle!

EPCOT is currently undergoing a major renovation and certain projects are likely to be delayed, but we anticipate that Remy’s Ratatouille Adventure in the France pavilion will open as planned. Construction is nearly complete, so it’s unlikely that Disney will stop at this point. Based on the ride at Disneyland Paris, Remy’s Ratatouille Adventure is a trackless attraction that virtually reduces guests to the size of a rat.

Disney California Adventure’s new Avenger’s Campus area is set to open on July 18. We can’t see Disney pulling the plug on this Disneyland Resort addition. The Marvel-themed land already has fans excited and has been highly hyped both on social media and by Disney Parks executives. If at all possible, we anticipate that Avenger’s Campus will be ready to go on its scheduled date.

What could be delayed?

A major reimagining of EPCOT’s Future World has been announced. This is a huge project that will reinvent the 1980s addition to include a Festival Center and a Moana water-themed walk through attraction. Although construction has started and numerous closures (Starbucks, Electric Umbrella, etc.) have already occurred in Future World, we could see the completion of this project delayed, although construction is unlikely to stop completely.

Mickey and Minnie’s Runway Railway ride opened to rave reviews at Disney’s Hollywood Studios just before the Disney Parks coronavirus closures were announced. The same dark ride is set to open in Disneyland’s Toontown area in 2022. Since construction for this project isn’t yet fully underway, the opening of the attraction (and therefore its construction) could very well be pushed back to account for Disney profits lost during the closures.

What could be cancelled?

The Gran Fiesta Tour attraction in the EPCOT World Showcase Mexico Pavilion has long been rumored to be getting a major overhaul. It currently features Donald Duck’s Three Caballeros, but could very well receive a Coco theme. Even though this ride desperately needs to be upgraded, Disney is likely to push it back to focus on more pressing projects that have already been announced.

Disneyland Park’s Indiana Jones Adventure was scheduled to undergo a major renovation in 2020. Because the ride remains popular as-is, this project is likely to be put on the back burner or axed altogether in the wake of the COVID-19 theme park closures. Disney will almost certainly revisit the Indiana Jones Adventure revamp in the future, but perhaps not right now.

These are just a few of the notable renovations and changes underway at Disneyland and Walt Disney World currently. The Star Wars Galactic Cruiser hotel, TRON Lightcycle Power Run, and new Disneyland hotel project all come to mind as well. Only time will tell for sure which Disney construction projects come to fruition as anticipated.

What new Disney Parks projects are you most excited about when the parks reopen? Tell us in the comments!