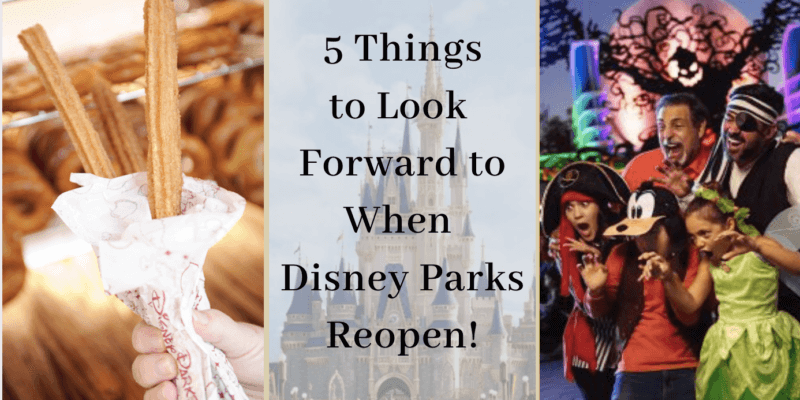 We know times are tough for Disney fans. We’ve resorted to recreating attractions (and even entire vacations) at home. But, like Walt Disney himself said, “Around here, we don’t look backwards for very long. We keep moving forward, opening up new doors and doing new things.”

There are so many things for Disney fans to be excited about when Disney World Resort and Disneyland Resort reopen! Here, we’ve rounded up the top five things to look forward to. Next time you’re feeling sad that the park gates aren’t open right now, remember that this is only temporary and the magic will return soon.

Walt Disney World opened to the public on October 1, 1971. Starting in January 2021, the theme park will be hosting a year-long 50th Anniversary Celebration.This is a huge milestone in Disney history and the park has all sorts of exciting things planned for fans.

For WDW’s 25th anniversary, Cinderella Castle got its famous (or infamous, depending on your personal opinion) “cake castle” makeover. To mark half a century, Disney is adding permanent gold details and a rose pink hue to Cinderella Castle. Construction has already begun and will continue as soon as it is deemed safe for workers to return to the Magic Kingdom.

Several exciting new attractions will also open just in time for Disney World’s 50th Anniversary. Remy’s Ratatouille Adventure is slated to open in EPCOT’s France pavilion this summer and Mary Poppins’s Cherry Tree Lane is expected to be added to the World Showcase’s United Kingdom pavilion in time for the celebration, although no official opening date has been released.

In the Magic Kingdom, the TRON Lightcycle Power Run roller coaster will also be debuting before the park’s Golden Anniversary. In addition to all of these openings, fans can expect lots of Disney World 50th Anniversary merchandise and special events.

Scheduled to open July 18, 2020, Disney California Adventure’s Avengers Campus is about to blow Marvel fans minds! Everything we know so far indicates that this new Disneyland Resort addition will be truly immersive.

Just last week, the Disneyland app map was updated to include Avengers Campus. Park officials also released information about WEB SLINGERS: A Spider-Man Adventure, which will incorporate brand new technology designed to make it seem as though guests are actually shooting webs from their fingers!

One bright side of the Disney theme parks closure is that the tech team has been able to run updates to both the Disneyland app and the My Disney Experience app. One big change is the addition of the “My Queues” section, indicating that some new attractions may utilize the same boarding group or virtual queue system as Rise of the Resistance.

While there’s been no confirmation as to whether Disney will be extending the 2020 EPCOT International Festival of the Arts or the 2020 California Adventure Food and Wine Festival, there are plenty of other events to look forward to later this year!

EPCOT’s Food and Wine Festival and Magic Kingdom’s Mickey’s Not So Scary Halloween Party will both be taking place this fall in Orlando. The Oogie Boogie Bash Halloween extravaganza is also scheduled to return to Disney California Adventure in Anaheim.

For many Disney fans, Disney World and Disneyland are so much more than theme parks. They’re our happy place, where we can forget about daily stress and make magical memories that get us through even the toughest times.

Imagine walking onto Main Street USA for the first time after this unexpected closure. We can almost taste the churros, smell the vanilla ice cream and cotton candy, and see the castle. We think every Disney lover will have a new appreciation for the parks following this unexpected closure and we can’t wait to savor the magic in a whole new way!

What are you most excited about when the Disney Parks reopen? We want to hear from you in the comments!