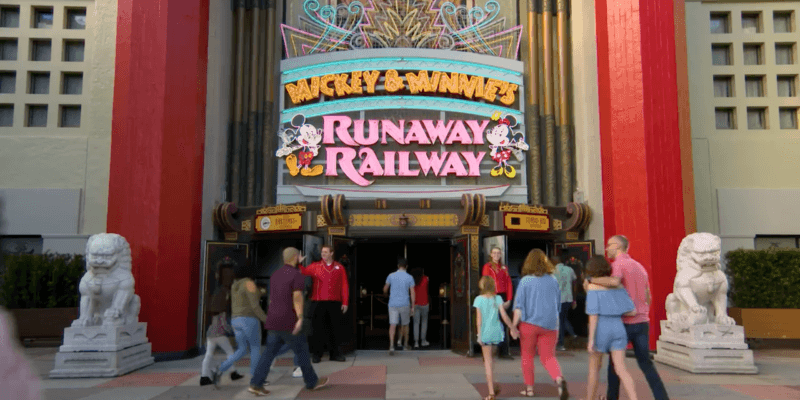 Even if you haven’t yet had the chance to ride Walt Disney World’s latest attraction, Mickey and Minnie’s Runaway Railway, you are going to want to download the theme song that goes along with the Disney Parks ride.

Nothing Can Stop Us Now is the theme song created specifically for Mickey and Minnie’s Runaway Railway, located inside the Chinese theater at Disney’s Hollywood Studios, and boy is it catchy!

Related: 12 Modern ‘Mickey Mouse’ Cartoons to Get You Ready for “Mickey and Minnie’s Runaway Railway” at Walt Disney World

If you are looking for a bit of Disney magic while you are at home or you are just loving this new song and want to enjoy it on the go, you are in luck because you can now find Nothing Can Stop Us Now on iTunes, Spotify, Google Play Music, Amazon Music and other music streaming services!

You can learn more information here.

Nothing Can Stop Us Now plays at various locations throughout Mickey and Minnie’s Runaway Railway, including during the pre-show and at certain spots throughout the actual Disney Parks attraction.

Mickey and Minnie’s Runaway Railway is the latest dark ride attraction located inside the Chinese Theater at Disney’s Hollywood Studios. This highly anticipated ride has replaced the popular Disney attraction, The Great Movie Ride, which was also located within the Chinese Theater.

This is the first ever Disney attraction that is based around Mickey Mouse himself! As guests enter the Chinese Theater, which will serve as “the magic portal”, they will instantly be fully emerged into Mickey’s Toontown.

Do You Want To Visit Disney World On Your Next Vacation?

If you want to visit Walt Disney World on your next family vacation and need help planning, don’t hesitate to reach out to our friends over at Academy Travel.

Have you gotten the chance to ride Mickey and Minnie’s Runaway Railway? Let us know in the comments.