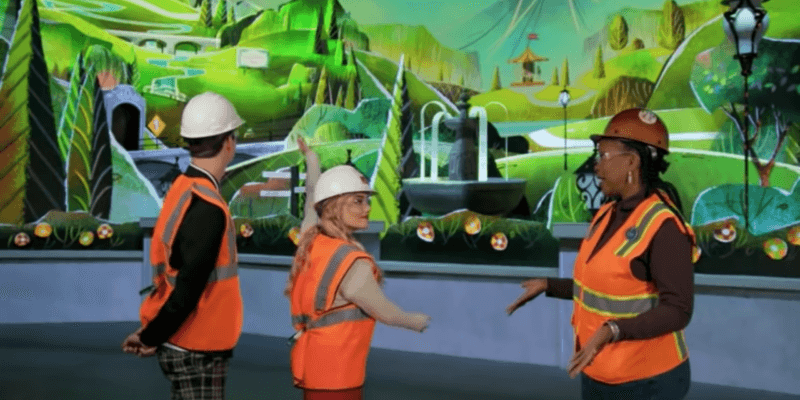 Another day, another sneak peek inside another upcoming Disney Parks attraction!

Here’s what we saw:

In the short clip, Meg and Milo were greeted by Disney Imagineer, Charita Carter. Carter told them that they were standing in “Runnamuck Park.” The ride’s story begins here with Mickey and Minnie getting ready to go on “the perfect picnic.”

It wouldn’t be Mickey and Minnie’s Runaway Railway without a train, after all. Well, the train whistle on this wacky runaway steam engine has some Disney history behind it. It is the same three-tone whistle heard in Mickey and Minnie’s first-ever short, “Steamboat Willie.”

One of the most exciting things about this ride is that it is Mickey and Minnie’s first ride-through attraction. Yes, “It was all started by a mouse,” but that mouse never got a ride until now! And the Imagineers know that.

“As we know the mickey shorts are so much fun,” Carter said. “They’ve got these vibrant environments and it was so important to us to make sure we were delivering on that in a dimensional environment for our guests.”

Mickey and Minnie’s Runaway Railway promises to be not just a super-vibrant ride for all ages, but also a very immersive one where “mouse rules apply” and anything can happen. The ride arrives at Disney’s Hollywood Studios in the Spring of 2020. It is already scheduled to arrive in Disneyland park in California in 2022.

You can watch the full video of the sneak peek here:

If you are planning a trip to Disney’s Hollywood Studios in the near future, the Disney experts at Academy Travel are standing by to help you make this Disney trip your most magical yet!

Are you excited for Mickey and Minnie’s Runaway Railway? What’s your favorite Mickey Mouse Short? Let us know in the comments!