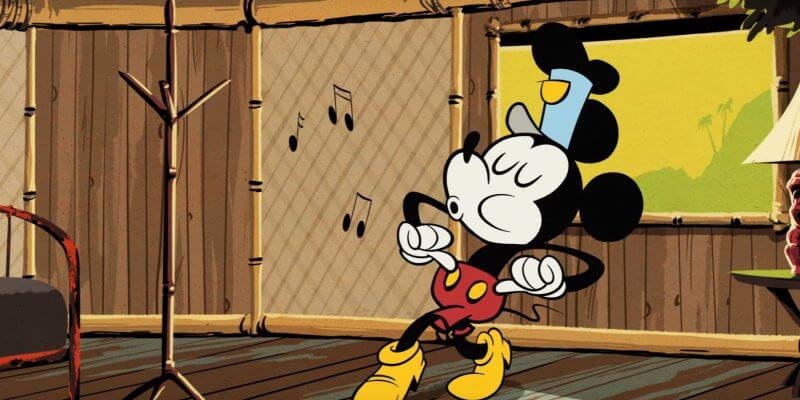 Mickey Mouse was an instant hit from the moment he debuted in 1928 as the star of the first “talking” cartoon.  “Steamboat Willie” launched a career for the mouse and an empire for his creator, Walt Disney.  Now that career is about to catapulted into the spotlight as the venerable mouse will be featured in a new attraction at Disney’s Hollywood Studios in Florida.

We don’t yet know which features will be slated to spotlighted in The Great Movie Ride’s replacement. However, if these twelve examples of Mickey’s modern animation are the inspiration for the new ride; and the same team creating these cartoon capers are part of the creative team, we can expect a crazy, light-hearted and hopefully, a few more self-lampooning laughs aboard Mickey & Minnie’s Runaway Railway.

Mickey and his friends, known as the fab five (Mickey, Goofy, Minnie, Donald and Daisy), have been enjoying a new look and fresh audience.  The pals recently returned for an all new animated series, “Mickey Mouse.”   This updated version of Walt Disney’s animated heroes expands the dynamic between the five friends and offers a fresh take on their animation style as well. The banner has, indeed, been raised high. Listed below are a dozen excellent examples of the vision that Paul Rudish (“Dexter’s Lab,” “Samurai Jack,” and “Star Wars Clone Wars”), Andy Suriano (“Doc Bizarre” and “Charlatan’s Ball”) and Aaron Springer (“Gravity Falls”) applied to the classic characters. Be sure to keep an eye out for some delightful digs and references to familiar Disney attractions.

With a fun Bollywood feel, this short reminds of a surreal visit to the Animal Kingdom

Even Freddy Krueger would approve of this tip of the hat to horror films.

With an obvious nod towards Tomorrowland’s iconic rocket at Disneyland, Mickey and Pluto star in a stellar send-up is out of this world.

Looking past the fact that Mickey’s friends cannot tell him apart from a chimp, the references to “Steamboat Willie” and the Jungle Cruise are rather amusing

One of the fun things about these new Mickey Mouse animated shorts is that most of the stories that take place outside of the United States are voiced in that country’s native language. It is a small world after all.