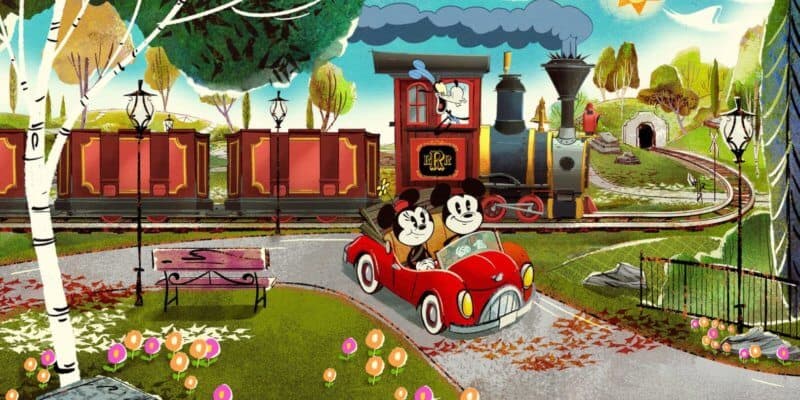 At a press event hosted by Disney, the company revealed a look closer look at Mickey & Minnie’s Runaway Railway, including a peak at the ride’s external marquee, which will hang on the Grauman’s Chinese Theatre when the attraction opens in 2020.

At the event, Kevin Rafferty, Walt Disney Imagineer, explained that the new sign will be “neony and animated,” before revealing an animated piece of concept art showing the sign’s neon lights flashing off and on at the top of the sign.

Rafferty shared that the new sign was designed to maintain the “heyday spirit of the original Chinese Theater in Hollywood,” where big movie premieres saw larger-than-life custom marquees. However, Imagineers also wanted the sign to capture the new look of the Mickey and Minnie cartoon shorts, which serves as the major inspiration of the ride.

The new sign is said to be hung in the center section of the Chinese Theater at Disney’s Hollywood Studios and will be bright enough to be seen by park guests “all the way down Hollywood Boulevard.”

Besides the reveal of the new sign, no other new details were revealed of the ride. When discussing the story of the attraction, Rafferty commented that it will be revealed at a later time. Although, it will resemble something similar to the current animated Mickey and Minnie shorts.

What are your thoughts of this new Marquee to be featured at Mickey & Minnie’s Runaway Railway when it opens in 2020? Let us know in the comments below!