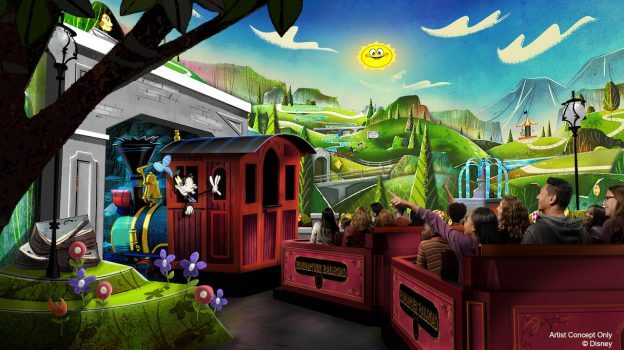 The new attraction, which is already scheduled to open at Disney’s Hollywood Studios in Spring 2020 (Disney previously said the ride would open in 2019), is now also making its ways to Mickey’s Toontown in Disneyland park in 2022. “This first major Mickey-themed ride-through attraction at Disneyland park will put you inside the wacky and unpredictable world of a Mickey Mouse cartoon short where anything can happen!” says Disney. “Once you step into the cartoon world of Mickey and Minnie, you’ll board a train with Goofy as the engineer. Then, one magical moment after the next leads you to a zany, out-of-control adventure filled with surprising twists and turns.”

The announcement was teased earlier today on Instagram before Disney Parks Blog made it official. You can see Disneyland Resort President Josh D’Amaro getting a peek at the plans for Mickey & Minnie’s Runaway Railway in the photo below.

Something exciting is coming to Mickey’s Toontown at @disneyland Park. Check out the @disneyparksblog today at 10 a.m. PT to learn about the news!

Details on the attraction for Disney’s Hollywood Studios were first revealed during D23 Expo 2017. Featuring the same style of artwork from the Mickey Mouse cartoon shorts, the ride includes an original story and catchy attraction theme song. When speaking about the ride in 2017, Walt Disney Imagineer Kevin Rafferty said, “This is one of the boldest…most impossible things I’ve ever worked on in almost 40 years of being an Imagineer. And you know what? That’s what I love about it. Well, that, and Mickey. This is not going to be a small attraction, it’s going to be game-changing.”

Are you excited for Mickey & Minnie’s Runaway Railway to make its way to Disneyland park? Let us know in the comments below!

Comments Off on Mickey & Minnie’s Runaway Railway announced for Disneyland