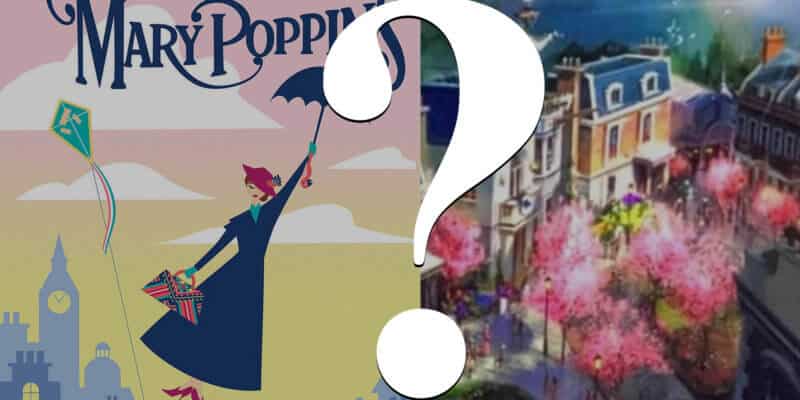 This past weekend’s D23 Expo was met with major announcements for all-things Disney–including the reveal of an all-new ride themed after everyone’s favorite magical nanny: Mary Poppins. However, what wasn’t announced was what this experience would actually be about? Here are some of our guesses.

But–before we dig into our guesses of what is to come, let’s talk about what we actually know. As per Bob Chapek’s announcement at the Disney Parks Panel at D23 and the Disney Parks Blog, the company has revealed that the United Kingdom pavilion in Epcot will see its first-ever attraction “inspired by Mary Poppins.” As per the release, guests will get to “step in time down Cherry Tree Lane past Admiral Boom’s house, then enter Number 17, home of the Banks family, where your adventure will begin.”

From this announcement alone, it obvious the Bank’s home will be the center of this attraction. But, does this mean guests to Epcot will get to experience a bath drawn by the enchanted nanny that could take them on an underwater adventure or possibly a journey into the scene of an antique bowl to be kidnapped by a talking wolf, weasel, and badger? With all the new experiences coming to the parks over the next few years–this might not be too crazy of an idea.

In an image revealed at the presentation, balloons can be seen floating over Cherry Tree Lane. Could this mean the experience may re-create the “Nowhere To Go But Up” scene featuring Angela Lansbury from the recently released “Mary Poppins Returns” film?

For those who may not remember the film, in this part of the movie the Banks children and Poppins visit the park’s fair where they purchase balloons that carry them into the air. In the scene, the children, Jack and many others can all be seen flying in the air having the time of their lives all from the power of simple balloons.

Whether or not any of these ideas could come to the new attraction are a mystery as Disney has not given any specific details yet about the attraction. However, how cool would it be to do any of these things?

What do you think the Mary Poppins attraction will be like when it premieres at Epcot? Let us know in the comments below!

If you haven’t already, be sure to take a look at some of the other recently announced projects from D23 Expo 2019 below:

Edna Mode is coming to an all-new reimagined Epcot, darling