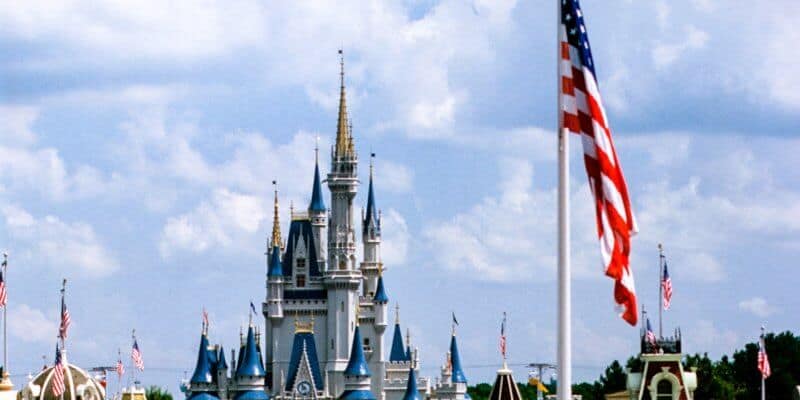 While these are indeed uncertain times for not only Disney fans, but Americans, Disney Parks are proving that even now there is still magic! Today, the Disney Parks Blog showcased a video of the American flag flying high in Disney World’s Magic Kingdom park.

For many Disney park goers, walking through the Magic Kingdom gates to see the flag waving over Main Street U.S.A. and Cinderella Castle is the highlight of any Disney World day. There’s something undeniably moving about the convergence of American patriotism and the theme park that fulfilled Walt Disney’s American dream.

On his Instagram account, Walt Disney World Resort President, Josh D’Amaro, shared, “While our world looks very different today, one thing endures…the American flag still flies over Walt Disney World. I’m inspired how our Security Cast Members continue to raise it each and every morning at Magic Kingdom while they are on duty protecting the magic.”

D’Amaro continued, “It’s a symbol that we’re still here and will not falter. I hope this inspires you as well. We will be back. Thanks to all our incredible Cast Members who continue to maintain the magic until that day. Until then, please take care of yourselves and your families. We will see you soon.”

In addition to sharing current #DisneyMagicMoments on social media and the official Disney Parks Blog, the company has updated both the Disney World app, My Disney Experience, and the Disneyland app to include “Magic Moments in History.”

This new feature will showcase facts about Disney theme parks, attractions, live shows, and more on a daily basis. It’s just one of the things the Disney family of companies is doing to keep fans engaged during this trying period.

They’ve also given hot films, such as Frozen 2 and The Rise of Skywalker, early digital releases and are slated to start streaming Onward on Disney+ on April 3, less than a month after its theatrical release.

Does this video of the flag over Magic Kingdom inspire you? What do you think about everything The Walt Disney Company is doing to keep the magic alive for Disney lovers right now?