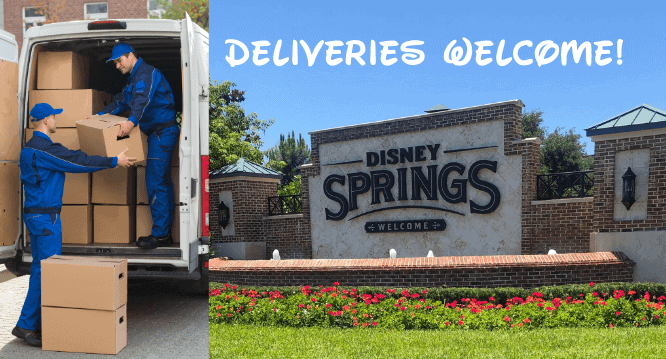 Just last week, the Florida Re-Opening Task Force announced the guidelines for Phase 1 of the state reopening for specific businesses including restaurants and retailers. Because Disney Springs consists mainly of shopping and dining, many have wondered if the Walt Disney World destination will re-open come May 4th.

The official word from Disney, according to this screenshot a guest shared with us from the My Disney Experience mobile app, is not yet.

However, during a recent drive through the Walt Disney World Resort, we noticed a new sign pointing to deliveries into a Disney Springs working parking lot. The sign had the words: “Deliveries, Oversized Only” with an arrow pointing local delivery traffic to a service parking lot inaccessible to guests.

As we drove by, the service parking lot looked full of cars, bustling with workers in that area.

All other Disney Springs parking garages remain closed and empty and local traffic throughout the resort is basically non-existent. However, could the delivery sign point at Disney Springs preparing for a re-opening soon?

According to the Florida Re-Opening Task Force, Phase one, which begins May 4th, will allow businesses like restaurants and retailers to reopen as long as they follow these guidelines and more:

Disney Springs is home to retailers such as the largest Disney store in the world, World of Disney, Planet Hollywood, the NBA Experience, and attractions such as Cirque du Soleil, AMC theaters, and Splitsville. Disney does not own some of these establishments; therefore, just like some remained open after the Disney owned retail establishments first closed, there is a possibility some of these third-party shops will open sooner than later. Time will tell.

Florida’s reopening task force is allowing large theme parks like the Walt Disney World Resort, Universal Orlando, and the like to use their own discretion regarding re-opening dates. So, although many restaurants and retailers in Florida will open their doors to the public come Monday, May 4th, a re-opening date for Disney Springs has not yet been announced.

This is a developing story so be sure to keep checking back with us here at Inside the Magic as we bring you the latest in Disney Parks news, pixie-dusted content, and more. See ya real soon!