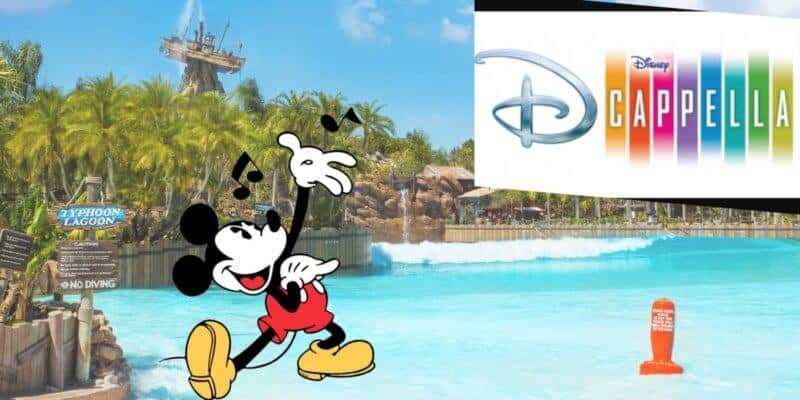 If you are looking for the perfect beach party — You are in for a real treat.

Disney has just announced that DCappella, the famous a cappella group who covers Disney songs, will be taking over Disney’s Typhoon Lagoon, a Walt Disney Worl Resort water park.

DCappella has just finished their very first national tour and just debuted their new album release and are celebrating by heading over to Typhoon Lagoon at Walt Disney World.

This April DCappella will be hosting the Disney DCappella Beach Bash!

Attention Disney guests — Get ready to sing those hearts out as DCappella preforms fan-favorite Disney songs for the guests at this special concert series, which takes place on select days inside the park.

The setlist will feature Disney songs to coincide with Disney’s Typhoon Lagoon tropical island theme so except to hear hits like You’re Welcome from Moana, Kiss the Girl from The Little Mermaid, and Hawaiian Roller Coaster Ride from Lilo & Stitch.

Brought to you by H2O+, the Disney DCappella Beach Bash at Disney’s Typhoon Lagoon park is a MUST do for all Disney guests on spring break.

Disney’s Typhoon Lagoon is one of two water parks located at Walt Disney World Resort, the other being Disney Parks’ Blizzard Beach. It is home to one of the largest wave pools in North America! It also features kids areas, cabanas, family rides, lazy rivers, surf lessons in the surf pool, trill rides, and more!

Do You Want To Attend The Disney DCappella Beach Bash On Your Next Disney Parks Vacation?

If you want to visit Walt Disney World Resort on your next family vacation to attend Disney DCappella Beach Bash and need help planning, don’t hesitate to reach out to our friends over at Academy Travel.

Have you ever heard DCappella? Are you excited to see them head to Disney’s Typhoon Lagoon? Let us know in the comments.