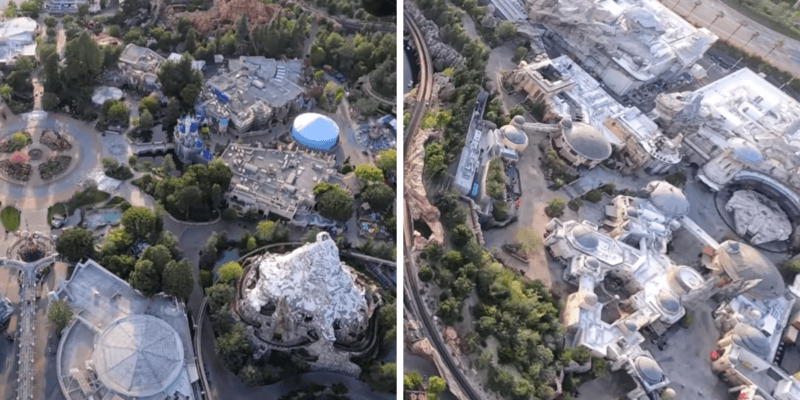 On a normal day, major flight path restrictions keep the skies about the Disneyland Resort in Anaheim California free of all man-made flying things.

But today is not a normal day. In fact, there have not been any normal days for months. So local helicopter pilot Micha Muzio decided to take a chance and do a flyover of the Happiest Place on Earth as it sits completely empty.

The video begins with Micha flying near Irvine Lake and asking for clearance to chart a course over Disneyland. Air Traffic Control informs him that he is not given a formal clearance, BUT as long as he remained “in transit”–that is, as long as he kept moving and didn’t hover over the property–and he doesn’t perform and hard maneuvers, it was okay.

And with that OK, off we go!

Watch This: Would You Walk Through Empty Disneyland? Check Out This Empty Disney Parks Video!

The first few minutes of the video is a ride over Southern California. Micha’s flight path takes him over Orange Park Acres, El Modena Open Space, and Santiago Creek Recharge Basin. Along the way, our pilot explains that Disneyland as a TFR in place. A Temporary Flight Restriction. Examples of this include being unable to fly over Dodgers Stadium during a baseball game. But Disney figured out how to make their TFR constantly in effect, essentially a PFR.

The route he takes first takes us over Angel Stadium of Anaheim, and then a few moments later, we finally arrive at the theme park. Our tour guide takes us over Disneyland park, and we see EVERYTHING.

We come in diagonally over the monorail track and Tomorrowland, we see Space Mountain off the left and the Matterhorn to the right. We fly right over the central hub and Sleeping Beauty Castle, then we cross over to Splash Mountain, Frontierland and Star Wars: Galaxy’s Edge.

It is a short little pass over, but don’t worry. You can skip to 9:50 to see a drawn-out, slow-motion replay to really let yourself take it all in.

Both parks at the Disneyland Resort — Disneyland and Disney California Adventure — have been closed since March 14, the longest closure in the park’s history–and remains closed until further notice. We apologize if this video of the Happiest Place on Earth doesn’t make waiting for the reopening any easier.

What do you think about seeing Disneyland from a helicopter? Did you get a good view of your favorite land or attraction? Let us know in the comments!

Comments Off on Soarin’ Over California: Watch a Helicopter Tour of Empty Disneyland Resort!