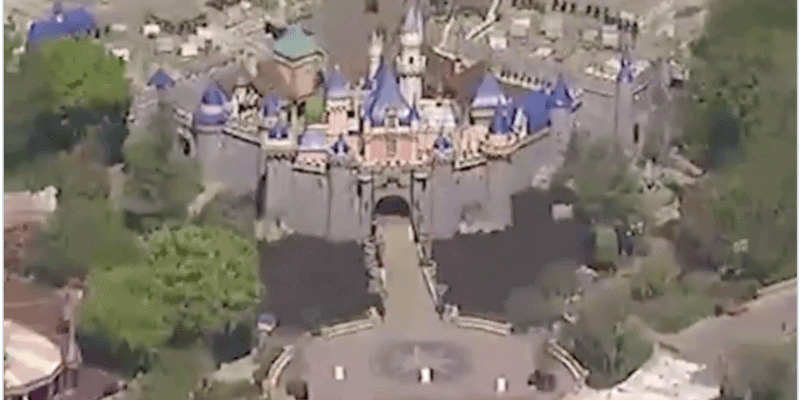 Just a short time ago, ABC7 Eyewitness News posted a fly over video of the empty Disneyland Resort in Anaheim, California.  As many of you know ABC is a part of the Walt Disney Company and their AIR7 chopper caught this video recently.  They captioned the video, “Have you ever seen Disneyland this empty?”

EMPTY DISNEYLAND: Have you ever seen #Disneyland this empty? Amid the resort’s closure due to the coronavirus pandemic, AIR7 captured footage of the park on Thursday. Details: https://t.co/9BjPncjsLT pic.twitter.com/jFJvMeHmIn

The answer is no.  Looking down from the aerial view, you see that the gates remain closed to the guests that brings a sadness to the video.  When the fly over Main Street U.S.A. it makes it look like as though they are showing a small architectural model replica of Disneyland with no one walking the street, but it is in fact a real image.

Not a single soul can be spotted in the video where one of the most exciting things at Disneyland is usually people watching.  Even from the day before the closures, the Disneyland Resort was starting to empty out a lot when guests, local and out of town alike, were starting to make plans for self-isolation and social distancing.

There might have been a few people who could have been spotted right after the closures, if the Avengers Campus had not halted construction at Disney’s California Adventure.  But with California’s stay-at-home order, it was halted as they are considered a non-essential workforce. There has been no announcement yet from Disney as to when construction could resume.  The Avengers Campus is still set to have its opening on July 18th, 2020.

Many of these empty theme park videos are circulating around the web and each and every one of them have that same eerie feeling.  You can see in Disney World and Universal Studios in Orlando, Florida have just become ghost towns as well.  New bird’s eye view images from a few days ago, all around Disney World, significantly Galaxy’s Edge, shows a post-apocalyptic type appearance.

We are positive that the Disney Parks will re-open someday in the future.  As we see these empty park videos and photos, it’s hard to see them without any guests, but we can take this as an opportunity as well.  We don’t typically get to see the sereneness and beauty of the Disney Parks without it being covered with people.  In the latter part of the video, you can see the unpolluted craftsmanship and detail of what goes into the making of a Disney park.

In other exciting things, Disney Parks announced that annual passholders will have their passes extended in accordance to the number of closure dates.  Start planning your days out!  What are going to be the first things you do when the parks re-open?  Even if you’re not a passholder, but you have a trip planned soon, what are you looking forward to?