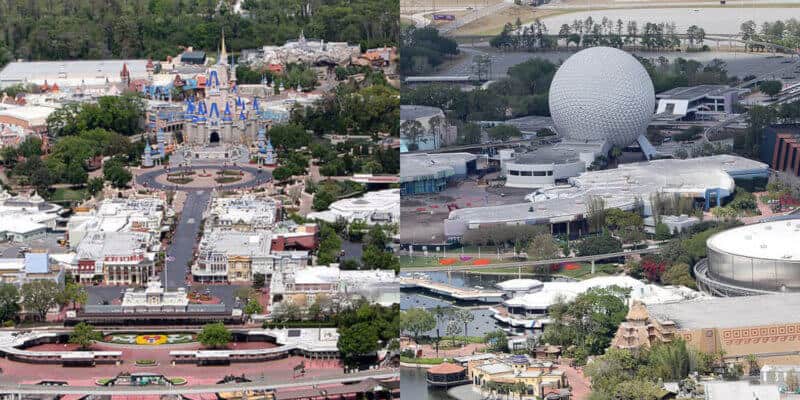 As the Coronavirus continues to plague many parts of the globe and Central Florida, new images show the most magical place in the world completely empty as all four theme parks remain closed. On a typical day, all four parks combined see upwards of over 160,000 visitors, and according to a recent report, due to this absence of guests, Walt Disney World could be seeing a loss of $40 million every day due to the park closures.

Walt Disney World theme parks first closed due to the spread of the Coronavirus on March 15, followed by the closures of Disney Springs and the Walt Disney World Resort hotels only days later.

The announcement of the cease on all operations originally came with an anticipated reopening of the resort on March 31. However, a new stay-at-home order in Central Florida, going into effect this Thursday night (March 26) through April 9, means a mandatory extension of the temporary closure for the parks–meaning even more revenue loss and an almost nightmarish view of the magical lands completely emptied as pictured in these new images below.

Pictured above, we see a once enchanting land bare, missing smiling faces and eager visitors ready to use their FastPasses to explore iconic magical grounds. Below, we see the same sad view from the perspective of the Tomorrowland side of Magic Kingdom.

In this next image, we see a beloved park known for showcasing modern innovation and beloved festivals that attract guests from all across the globe–now in a state of desolation. It can be argued that this view of the theme park would typically not show an extreme amount of guests, even during times of current operation, due to it being majorly of the construction taking place in Future World.

As one might have guessed, if the theme parks have no park guests then their parking lots will be empty as well. Although, it can be argued by a frequent park goer that seeing the massed paved area without any vehicles is a peculiar sight given the fact that these are typically packed with cars and their owners searching for them.

At this time, Walt Disney World has not set an official date for reopening.

When the Walt Disney World Resort reopens, which of the four theme parks do you plan to visit first? Let us know in the comments!