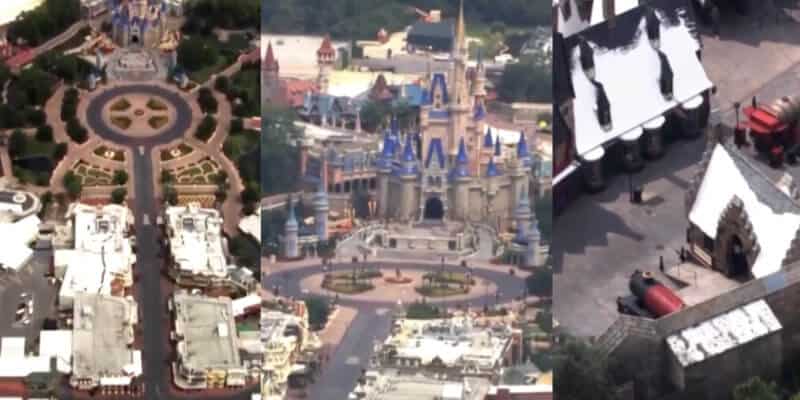 In the wake of the current pandemic, Walt Disney World and Universal Orlando continue to remain closed until further notice. At a time when virtually no park guests are present at either set of theme parks, both resorts appear almost haunted in a new video.

The video, featured below, shows an aerial view of Walt Disney World’s Magic Kingdom and Universal Orlando’s Islands of Adventure — both appearing similar to ghost towns as they are completely void of guests.

If you’re a frequent visitor to either theme park resort, you’re probably familiar with the bustling of traveling families with strollers, childless millennials, and Annual Passholders. However, since mid-March, this has not been the case.

At this time, it is still not known when Walt Disney World or Universal Orlando may reopen given several facts: including both companies’ recently announced furloughs of employees and a recent statement by Orange County Mayor Jerry Demings who stated it could be “June–early– June” before we see some relaxing of the restrictions currently in place.

“I believe, given the models, it could be June — early June — where we see some relaxing of the restrictions in place. But they would have to stay in place to some degree through late summer,” Demings stated.

As we shared back in March, the Walt Disney World Resort is reported to be losing $40 million a day each day it remains closed–which is a large sum of money for the Walt Disney Company, who recently took out another $5 billion in credit. This is the second loan the U.S. company has taken amid the current poor financial climate of the conglomerate, which is seeing losses across its many companies.

Comcast, Universal Orlando’s parent company, has also been seeing losses in the wake of the current pandemic. Recently, the company followed in suit with the Walt Disney Company and took $4 billion in debt to help with the offset of the virus.

At this time, it is not known when either theme park resort will reopen in Central Florida, nor if either will follow new procedures at the time of their openings. Similar to the East coast, it is also unknown when Disneyland and Universal Hollywood will also reopen as well.

You can also watch the full aerial video on WESH’s website here.

Has the current pandemic altered your Disney or Universal vacations? Let us know in the comments below.