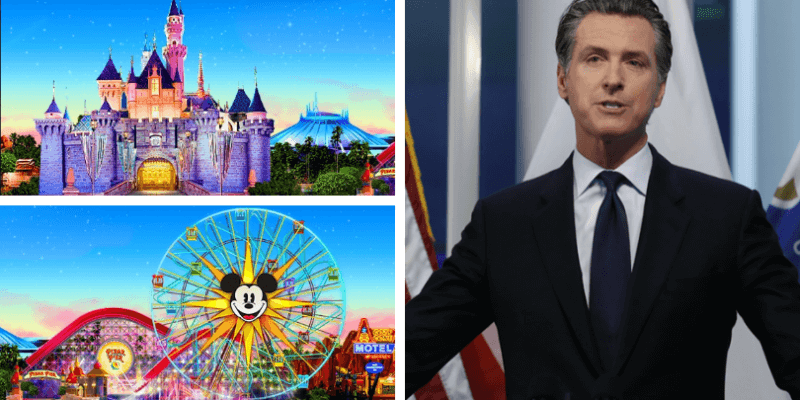 If California Governor Gavin Newsom’s announcement sounded familiar today, and you thought you came across some old news, unfortunately, it’s not. Today, he announced that California was going to go through a rollback in the reopening of businesses.  Yes, this is California lockdown round two!  This time’s closures aren’t as severe as the first time around so it’s not a complete lockdown, but there will be some major changes.

Here’s what you need to know about the California closures and what this could mean for Disneyland Resort.

Bars must close ALL operations.

NEW: As #COVID19 cases and hospitalizations continue to rise, 30 counties will now be required to CLOSE INDOOR OPERATIONS for:

Before the Fourth of July weekend, Governor Newsom announced an ordinance which affected 19 counties in California with closures of indoor dining and all bars. These closures affected Orange County, where Downtown Disney is located. Effective today, July 13, the governor announced that there would be a statewide closure of all indoor operations which includes, dining, retail, movie theaters, and gyms.

This isn’t exactly like the first round of closures that happened almost four months back.  If a business can operate outdoors, they can do so, such as, dining on an outdoor patio or pick-up window at Downtown Disney’s Black Tap.

What This Means for Disneyland

While we don’t know for sure if this would delay Disneyland’s reopening further, we know it might affect it to some extent, on top of the extra state guidelines the Disneyland Resort is waiting on for reopening theme parks.

Downtown Disney at Disneyland reopened last Thursday, July 9, and with Governor Newsom’s ordinance that was announced before the holiday weekend, it did delay the reopening of some restaurants.  Only restaurants with outdoor dining have reopened at Downtown Disney so far.

Although we don’t yet know when Disneyland and Disney California Adventure will reopen, Newsom’s orders could likely affect the operations of restaurants and attractions within the theme parks. Without being able to operate indoors and social distancing, dining options like Cafe Orleans, Carnation Cafe, and Lamplight Lounge in the parks could be looking around a quarter of the capacity and Blue Bayou temporarily unable to open at all.  Attractions like Big Thunder Mountain and Radiator Springs Racer may be able to run, but Indiana Jones Adventure and Soarin’ Around the World would not.

Keep in mind that we don’t yet know which dining locations and attractions will be open when Disneyland and Disney California Adventure reopen, so we will keep you updated when we know more information.

Well, a different closure that was confirmed today came from across the Pacific Ocean because Hong Kong Disneyland announced that they would be closing again on Wednesday, July 15.

This announcement sparked some questions on whether or not would see this from Walt Disney World.  The Walt Disney World Resort in Orlando, Florida, just reopened Magic Kingdom and Disney’s Animal Kingdom to all Guests with Disney ParkP ass on Saturday, July 11 and will be reopening Disney’s Hollywood Studios and EPCOT on Wednesday, July 15.  Mayor of Orange County, Florida, Jerry Demings assured people today that the Disney Parks are a safe place to be, and Florida Governor Ron DeSantis is also very confident in the Walt Disney World reopening.

Stay tuned to Inside the Magic for the latest news about Disney Parks and Disneyland Resort’s reopening.

Book you next Disney trip with Academy Travel here!