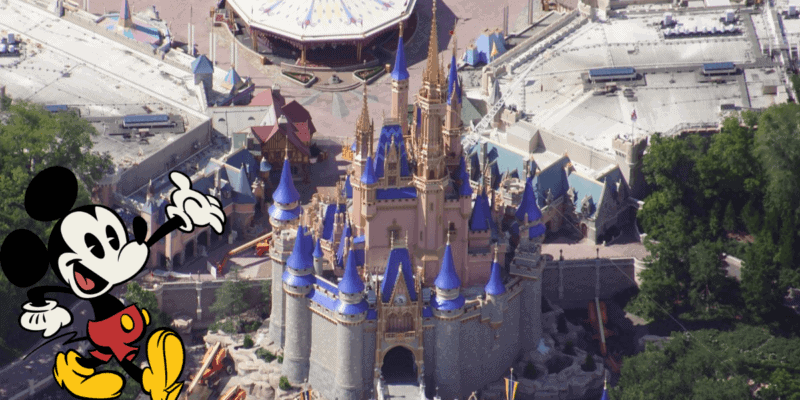 We are going back to Walt Disney World! On July 11, 2020, the Magic Kingdom will once again reopen to Guests after closing for several weeks due to the global pandemic, and when Guests take their next walk down Main Street, they will see Cinderella Castle shining shimmering splendid in its new paint job that is currently underway.

Well, we have another sneak peek of what that will look like.

Before the closure, Inside the Magic saw Disney World kick off the beginning Cinderella Castle’s “Royal Makeover” for the 50th Anniversary Celebration. And when progress began once again after a short pause due to the pandemic, we were more than happy to share those with our audience.

Now we have even more aerial sneak peeks of the progress that has been done in the short time between the recommencement and today. Brought to us by Twitter user @Bioreconstruct who tweeted: “Aerial look at the gold trim added to Cinderella Castle for the 50th anniversary. It’s also been painted rose hues, and the roofs are richer blue.”

Aerial look at the gold trim added to Cinderella Castle for the 50th anniversary. It's also been painted rose hues, and the roofs are richer blue. pic.twitter.com/JIy9n8hVl4

Aerial view of Cinderella Castle today. It's been trimmed in gold for the 50th anniversary. Roofs at the hub are being painted matching richer blue. pic.twitter.com/0GyCUG1FQI

Aerial view of Cinderella Castle today. Seems like most of the 50th Anniversary gold detailing is complete. Also has richer blue roofs and rose hues. pic.twitter.com/fSI3wRZR8p

Aerial look at Cinderella Castle today. Note that roofs in the hub are being painted richer blue too.

We can see the gold and rose hue spread even more widespread across the upper levels of the castle, as well as more complete blue spires than just a few weeks before.

Regardless of whether or not it will be completed by reopening, Cinderella Castle will be missing the stage show Mickey’s Royal Friendship Faire, and the princess dress-up experience, Bibbidi Bobbidi Boutique. The fan-favorite character breakfast and dining experience hosted in Cinderella Castle, Cinderella’s Royal Table, will also be unavailable for the time being.

At this time, dining reservations are not available for in-park dining experiences. Reservations will resume at a later date.

When in-park dining initially becomes available, you’ll need valid park admission, a reservation for park entry and a dining reservation to dine at an in-park, table-service restaurant. Dining reservations do not guarantee admission to the park.

What do you think of Cinderella Castle’s Royal Makeover so far? Let us know in the comments!