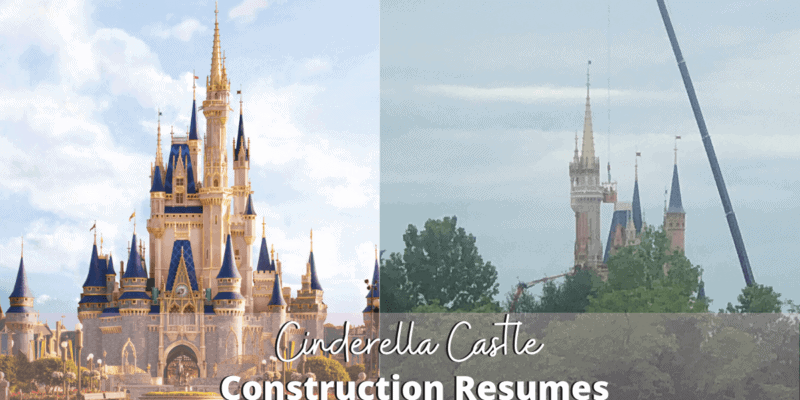 The Walt Disney World Resort theme parks might still be closed, but there is a date for reopening on the calendar and it appears Cinderella Castle’s makeover has resumed!

In a recent drive by the back roads of Disney World, we were able to capture some workers diligently beautifying the castle.

To refresh your memory, here is what the finished product will look like in Disney’s artist rendering. So pretty, right?

The royal makeover will include dazzling gold embroidery, bolder colors on the gray brick walls, and blue spires as well as a dusting of rose pink on the central tower. These Cinderella Castle renovations are being done to get the castle ready for Walt Disney World’s 50th Anniversary celebration in 2021.

Take a look at the work being done just today!

Before the theme parks closed, we got a preview up close of the new colors getting applied and it was looking dashing! However, construction work was halted when the resort had to abruptly close its doors because of the health pandemic.

The Walt Disney World resort had a long list of projects they had begun prior to the closing of the parks. Some of the projects include the construction of the new attraction in Tomorrowland, TRON Lightcycle Power Run which is underway, the full park reimagining of EPCOT, including the addition of several new attractions like Remy’s Ratatouille Adventure, and Guardians Of The Galaxy Cosmic Rewind.

We hope that the slow restart of the Cinderella Castle makeover is pointing at the possibility that these other projects will resume promptly as well. We can’t wait to see the Walt Disney World transformation for its 50th anniversary next yEAR!

What are you most excited about for the 50th anniversary of the Walt Disney World Resort? We want to hEAR from you! Let us know in the comments.