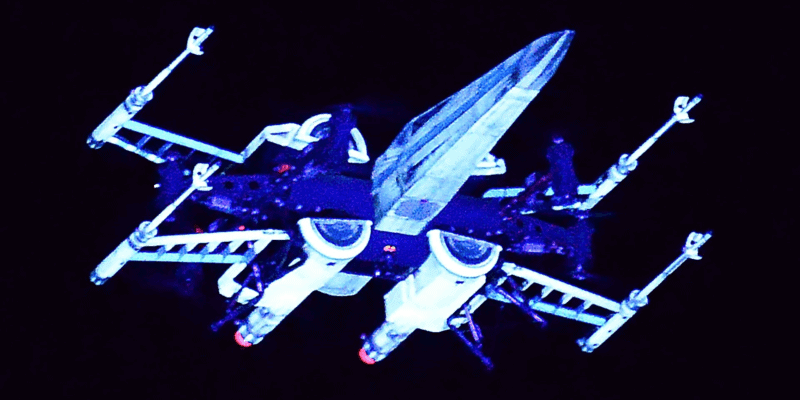 Disney likes to do things in big, memorable ways. It’s just what they do–part of what makes Disney, Disney.

So it should have come as no surprise that Walt Disney World would pull out all the stops at the dedication ceremony for the new Star Wars: Rise of the Resistance attraction at Galaxy’s Edge at Disney’s Hollywood Studios Wednesday evening.

As a huge crowd gathered to celebrate the opening of the second attraction at Star Wars: Galaxy’s Edge, Disney Parks Blog was preparing to live-stream the event so that fans inside and outside the park could experience the magic leading up to the ride’s opening.

Chairman of Disney Parks, Products and Experiences Bob Chapek spoke during the ceremony–an event that was well-attended by fans who couldn’t wait to experience Star Wars: Rise of the Resistance for themselves. But they got more than they bargained for, as all eyes were on the skies when a pair of X-Wing fighters took flight right in front of them.

Yesterday, Boeing confirmed that they were indeed a part of the equation when it came to designing the X-Wings for the ceremony. The X-Wings are about the size of a family van or an SUV and are based on Boeing’s Cargo Air Vehicle drone. Boeing would only say that the aircraft were theirs, but spokespeople for the aerospace company wouldn’t say anymore–including whether the X-Wings will be part of Disneyland’s Rise of the Resistance dedication next month. You can see the drones in this tweet from Boeing CEO Dennis Muilenburg:

The Boeing drones on which the X-Wings were based are designed to carry as much as 500 pounds of cargo–that’s a lot of lightsabers!

Star Wars: Rise of the Resistance opened yesterday to huge crowds of people hoping to be among the first to help take down the New Order. The new attraction features the latest in ride technology, state-of-the-art audio-animatronics with the most fluid, lifelike movements we’ve seen yet from Disney and special effects that immerse Guests in the experience from beginning to end.

The same attraction opens at Star Wars: Galaxy’s Edge at Disneyland in Calfornia in mid-January, and we can only hope the fanfare will be similar.

Have you already experienced Star Wars: Rise of the Resistance? What is the best thing about the attraction? Let us know in the comments below.