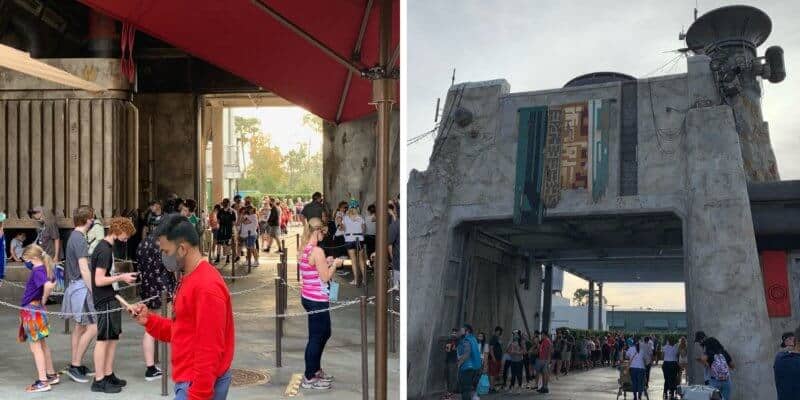 Park Hopping is finally back at Disney World, and it has been interesting to see how the newly returned offering is functioning amid the capacity limits that are imposed at the parks. It seems that although the queues at Disney’s Hollywood Studios are so long that they are wrapping backstage — capacity is yet to be capped for Park Hoppers.

Today is the second day that Park Hopping was re-introduced to Disney World, and crowds are showing up to take advantage of it. At Disney’s Hollywood Studios, in the late afternoon after 2:00 PM, lines began to grow. In Star Wars: Galaxy’s Edge, the attraction queue for Millennium Falcon: Smugglers Run was snaking throughout the land and even into backstage areas. The wait time for the attraction has been around 70 minutes throughout the day, though the park is not yet at capacity. In Toy Story Land, Slinky Dog Dash also wrapped backstage heading towards Voyage of the Little Mermaid and right outside of the land with wait times peaking at 80 minutes this afternoon.

Inside the Magic confirmed that the park had not reached capacity at any time in the day after consistently calling the capacity hotline, and always receiving the message that all parks were available for Park Hopping.

However, even though the capacity hotline said that the parks were not at capacity, if we take a look at the Park Pass availability calendar, we can see that for today, the only park not at capacity was EPCOT. Therefore, because of Park Hopping, Guests who cannot get a Disney Park Pass can still have a chance at entering the park after 2:00 pm.

Park Hopping at Disney World currently allows Guests to arrive at their second park after 2:00 PM so long as they have already entered the park that coincides with their Disney Park Pass reservation. That being said, the parks are still capped at a 35% capacity, so Guests are not guaranteed their second (or third, or fourth) park entry.

Prior to Park Hopping returning, if a park was at max capacity, as people left throughout the day, more Disney Park Passes were never added. Now, with Park Hopping back, after 2:00 PM the parks become more of a first-come-first-serve situation where keeping a fully packed (35% capacity) park is much easier since the foot traffic is rotating, as opposed to the park only welcoming the same Guests all day.

With that being the case, it seems that we are beginning to see these long queues more often. Now, it’s possible for the lines to stay long all day, with new Guests continuing to come into the park in order to ride the most popular attractions.

If you are Park Hopping and want to avoid the possible disappointment that would come along with showing up to an at-capacity park and having to wait for other Guests to leave, call the capacity hotline. Disney has created a capacity hotline, much like Universal Orlando Resort, where Guests can call and get a fast and simple automated response that will tell them which parks are at capacity and which are not.

At the moment, even with these crowds, no Disney World park has hit capacity all day long. This is likely because Cast Members are now able to track outgoing Guests and welcome more in as others leave. So even if the Disney Park Passes for Disney’s Hollywood Studios were sold out, the moment one group of Guests leaves, the park is technically no longer at capacity — and for the first time since reopening, Disney will allow other Guests to take their place.

If you want to return to Park Hop all over Disney World, you should start planning today! Click here to get ready to head to the Most Magical Place on Earth!

Would you feel safe going to Disney World, knowing that Park Hopping could keep the parks consistently more crowded all day? Would you prefer to no longer have Park Hopping in order to have moments in the day where Guests leave and the parks feel more empty? Let us know!