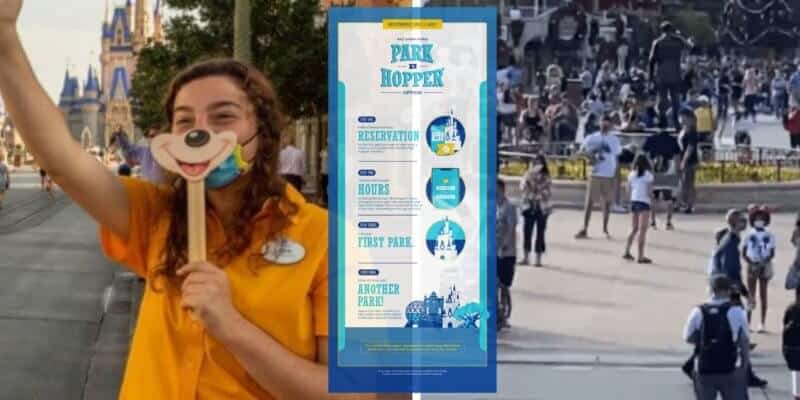 With Park Hopping officially returning to Disney World as of January 1, 2021, many Guests may not know that just because the offering is back, doesn’t mean it is going to work as we once remembered it.

Park Hopping at Disney World has many more rules and regulations that Guests must comply with this year, and although the rules are more constrictive than we are used to, Disney is making sure they are finding ways to avoid any disappointment.

As you may already know, Park Hopping can only commence after 2:00 PM daily. Guests who wish to Park Hop can do so if they have already entered the park in which their Disney Park Pass reservation was made, and of course, as long as they have a valid Annual Pass or Park Hopper ticket for the day of their visit. Capacity, however, is still capped at 35% — which means if you attempt to Park Hop to Magic Kingdom and the park is at capacity, you cannot enter.

The disappointment of traveling to another theme park only to be rejected upon arrival when Park Hopping would be highly inconvenient for Guests, so Disney is making sure that everyone has easy and up to the minute access on the status of the theme parks’ capacity.

Disney has created a capacity hotline where Guests can easily call in and get an automated message that will tell them which parks are at capacity, and which are not. Inside the Magic has already tested the hotline, and it is working perfectly. All you need to do is call (407) 560-5000, and you will instantly be connected with the respective automated response.

When we gave the capacity hotline a call, the message said:

Greeting from Walt Disney World Resort. At this time, all theme parks are available for Park Hopper access. Thank you and have a magical day.

Therefore, Guests can be sure to check the capacity hotline before possibly wasting their time traveling to another park that they are unable to enter. At the moment, the My Disney Experience app does not show the Disney World theme park capacity limits as the hotline does, but this reporter hopes that this feature will be added to the app over time.

Knowing that we can Park Hop to Magic Kingdom, Animal Kingdom, EPCOT, and Disney’s Hollywood Studios all in one day, and keep track of the capacity limits in every park easily takes off the stress that comes with Park Hopping while parks are running at lower capacity limits.

Do you think the capacity hotline is a good idea? Or would you rather have the capacity amounts posted and updated on the My Disney Experience app?