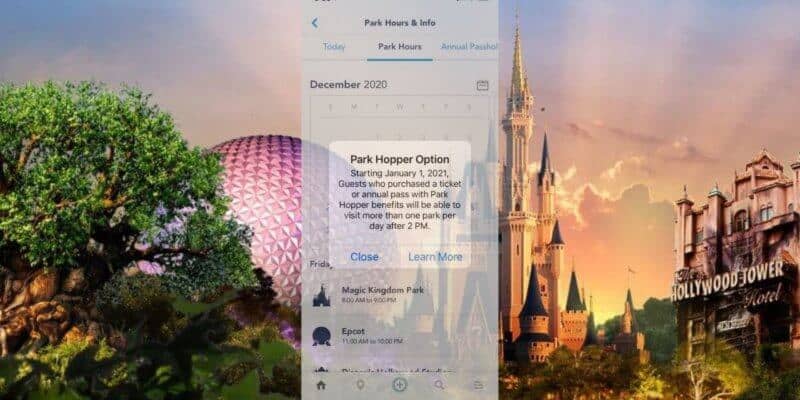 If you have been to Disney World since it reopened during the pandemic, you would have noticed many offerings are currently missing, a huge one being Park Hopping.

Many Disney World Guests love to Park Hop, as it can help you see more if you can’t be at the parks every day — and for Annual Passholders, it’s a perk you pay for! Not having the ability to Park Hop has left many Guests craving to take the Disney Skyliner from EPCOT to Disney’s Hollywood Studios, and since that ability is returning in January 2021, Guests are ready to utilize it!

For many, accepting that Park Hopping was returning was more than enough to persuade them to return to Disney World after missing it for so long, but Disney is doing us one better and extending hours in early January which will give Guests more time to hop from Magic Kingdom to Animal Kingdom.

As we have previously reported, Park Hopping will resume at Disney World as of January 1st, 2021 (talk about starting off 2021 right!). Starting at 2:00 pm daily, if you have either an Annual Pass or a valid Park Hopping ticket, you will be able to go to multiple Disney World theme parks, in a single day — as long as they have not hit capacity, anyway.

But now, on the My Disney Experience app, we can see that park hours have been extended at three Disney World theme parks for January 1 and 2! This will significantly help Guests have more time to Park Hop and will give them some more leeway in terms of travel time. It also means that Guests will have more time in the evening at the park(s) that they are choosing to visit during the second half of their day.

Read More: Disney Modifies Park Hopping: What We Know for 2021

Here are the new hours of operation for January 1st and 2nd:

It is quite clear that Disney is anticipating many Guests to utilize the Park Hopping feature once it is back considering they extended their park hours. If it is successful, this Walt Disney World Guest hopes that the parks continue to operate on these extended hours in order to continue to give Guests maximum time in multiple parks.

Stay tuned to Inside the Magic for all you need to know regarding Park Hopping at Disney World!

Click here to book your next trip to Walt Disney World Resort in 2021!