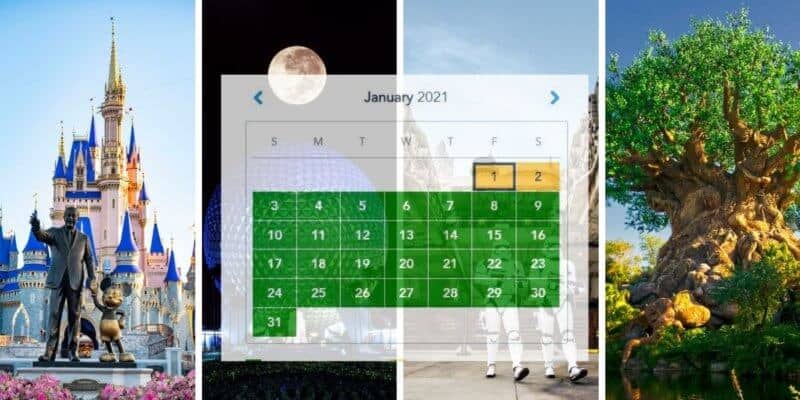 We recently reported that just one day after Christmas, the crowds were lowering at Walt Disney World theme parks, but it still looks as though for the remainder of this week Guests are still planning to visit the Disney parks.

Looking ahead to 2021, on the other hand, there is currently full availability for all four theme parks — Magic Kingdom, EPCOT, Disney’s Hollywood Studios, Disney’s Animal Kingdom — starting January 3, which is something we have not seen in quite some time. Not only is this a good sign as it will be easier for those wishing to visit the theme parks in the New Year, but it also means Park Hopping will be much more accessible once it makes its return in 2021.

In the screenshot below, you can see that for the remainder of this week (December 27 through January 2), some of the parks no longer have an available Disney Park Pass reservation. This indicates that Guests are continuing to visit Walt Disney World theme parks during the remainder of the holiday season.

But, when you continue to look further into 2021, you will see that all four parks — Magic Kingdom, EPCOT, Disney’s Hollywood Studios, Disney’s Animal Kingdom — have full availability at this time. Beginning January 3 and going all the way through the remainder of the month (and even further into February and March), Guests can choose a Disney Park Pass at any of the four theme parks. Seeing this also indicates that it will be much easier to Park Hop once this perk returns to Disney World on January 1.

As of January 1, 2021, Park Hopping will return to Walt Disney World, but it will be modified and have its own restrictions. For example, Guests will not be able to enter their second theme park of the day before 2 PM, and the theme parks will still be held to the 35% capacity limit. Considering all of the availability for Disney Park Passes in January, it looks as though Guests will be able to hop between theme parks without having to worry about them hitting capacity — at least, at the time of this article’s publication, that is our impression.

Of course, this is all subject to change so it’s always best to check the official Disney Park Pass availability calendar on the Walt Disney World website for the most up-to-date Disney Park Pass reservation information.

Have you visited Disney World recently? Do you plan on visiting in 2021? Let us know in the comments below.

Comments Off on Park Hopping Made Easy in 2021: All Parks Show Full Availability