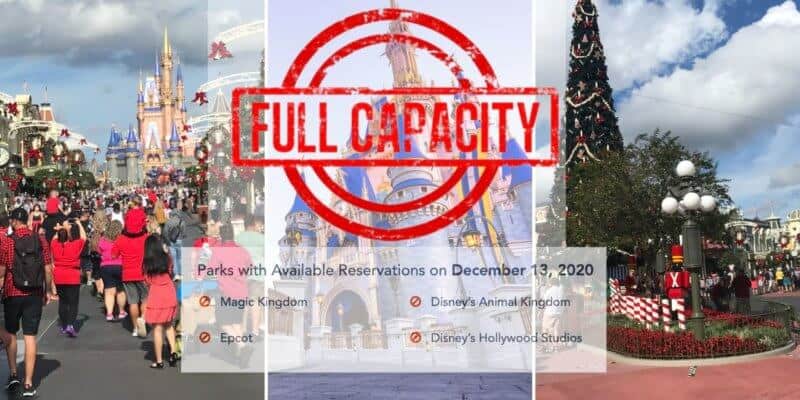 Walt Disney World is once again at full capacity, with all Disney Park Pass reservations for all ticket levels now sold out for all four theme parks. This is the second day in a row the Disney World theme parks reached capacity as on December 12, we reported the park passes were also sold out.

You can see in the screenshot below, taken from the Walt Disney World park pass website, that for today all four theme parks no longer have availability for any of the ticket types.

An Inside the Magic reader is visiting Magic Kingdom today and sent us some photos, showing the crowd levels at the theme park, which, despite being at full limited capacity, isn’t as crowded as you’d imagine. Again, keep in mind that Walt Disney World is currently operating at a lower capacity than usual, so even with the theme parks “hitting capacity” it is nothing like it was prior to the pandemic.

Near the Main Street Train Station, there weren’t too many crowds at around 12 pm, but if you look closer to where Main Street U.S.A. begins, there are people lined up on the sidewalks, this was for the holiday cavalcades that pop up throughout the day.

After a few minutes passed by, you can see the crowds dispersed as Guests scattered throughout the other parts of Magic Kingdom.

Once Merida was making her way down Main Street, some Guests stopped to watch the upcoming cavalcade but overall, as you can see in the photo below, the crowds aren’t too bad.

At around 1:30 pm, this is what Tomorrowland looked like. You can see there are small groups of people scattered throughout the land, all socially distanced.

Typically, the walkway by Peter Pan’s Flight and “it’s a small world” is packed but as you can see in the photo below, taken at approximately 3 pm, it is not nearly as bad as you would think.

Overall, our Inside the Magic reader said that despite the park being at full limited capacity, the crowds aren’t nearly as bad as she expected.

Disney Springs has also been drawing in more crowds during the holiday season than it was earlier in the year, which you can read more about here.

If you are planning to visit Walt Disney World on an upcoming vacation, please remember to follow the new safety and health protocols in order to keep you and others safe during this time. Keep your distance from others, wear your face coverings, use the hand sanitizer located throughout the resort, try to use paperless payment methods, and cover your mouth and nose while sneezing or coughing. For more information on Disney World’s safety protocols, visit their official website here.

Be sure to get in touch with your travel agent as they are always up-to-date on the latest protocols at the Disney Parks around the world. If you aren’t yet working with a travel agent, get started today!

Do you have a Disney World vacation booked for the holiday season? Let us know in the comments below.

Comments Off on Disney World Hits Capacity AGAIN, But It Isn’t Too Crowded