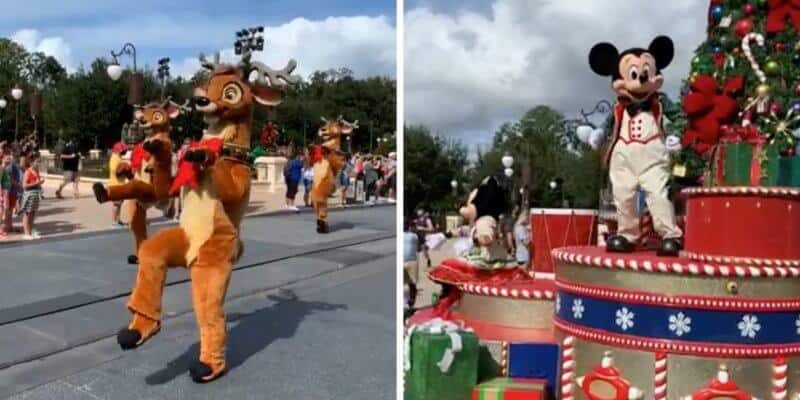 The holiday season has officially begun at Walt Disney World. Beginning today, November 6, the theme parks are completely decked out in spectacular holiday decor. “Bells are ringin’, children singin’, all is merry and bright” at Walt Disney World Resort.

Though things won’t look exactly as they have in the past — for example, Disney has announced that there will be no gingerbread houses on display at the resorts nor will Cinderella Castle feature the iconic Castle Dream Lights — the theme parks are still offering plenty of festivities to get everyone in the holiday mood!

One of the things Walt Disney World announced for the 2020 holiday season is the occasional appearances of character cavalcades! When the theme parks first opened, they debuted pop up cavalcades so Guests could still wave to their favorite Disney characters from a safe social distance. For Halloween, Magic Kingdom replaced some of these cavalcades with Halloween themed ones, including a Nightmare Before Christmas one and a villains cavalcade.

And now, for the winter holidays — Disney World is doing the same. Guests can expect to see Mickey and the gang decked out in holiday attire, gingerbread men, elves, and even Santa Claus!

Inside the Magic is visiting the theme parks for the holidays and we were able to catch some of these new holiday cavalcades. Let’s check them out!

There are several different holiday cavalcades at Magic Kingdom for this holiday season.

Your favorite characters don their holiday best and celebrate the season in a series of special cavalcades, complete with Christmastime floats and music. From Mickey and friends trimming a tree to Goofy and his pals whipping up a bakeshop full of scrumptious treats, character cavalcades bring holiday spirit to the streets of Magic Kingdom throughout the day. And keep your eyes open for Santa when he glides down the parade route in his sleigh.

Main Street, U.S.A. is the spot to catch the Holiday Trolley, bringing festive harmonies from the Dapper Dans barbershop quartet, and you may just see some Toy Soldiers joining the Main Street Philharmonic when they march through Magic Kingdom playing their merry melodies.

Here are some videos and photos of the ones Inside the Magic has spotted so far!

Dapper Dans on the Holiday Trolley

“Festive Flotillas” are appearing all along the waterways of Disney’s Animal Kingdom! Disney Parks Blog shares:

“Donald’s Dino Bash Festive Flotilla” takes its seasonal celebration to the water, with character friends waving to everyone as they pass, and Chip ‘n’ Dale jingle through the jungle, bringing their own style of holiday flair to the river. The Discovery Island Drummers cruise along, too, entertaining guests on the shore with an energetic holiday beat. And when Santa Claus makes the trek to Disney’s Animal Kingdom, he’ll spread the joyous spirit of the season to all he sees along the way.

Inside the Magic is inside the theme park today and we were able to capture some of the “Festive Flotillas” for the holidays.

Guests visiting Disney’s Hollywood Studios get their own visit from Santa when he brings glitz and glamour to a motorcade down Hollywood Boulevard, led by an entourage of elves and riding in his red convertible packed with presents. And just in time for the holiday season, “For the First Time in Forever: A Frozen Sing-Along Celebration” adds a festive finale, featuring everyone’s favorite snowman, Olaf, and celebratory songs of the season.

And don’t forget, you can now visit Minnie and her friends over at Hollywood and Vine for Minnie’s Holiday Dine. The Disney website reads:

Minnie’s Holiday Dine
November 6 – January 4
Deck the halls at a dazzling dinner party filled with holiday cheer and the joy of the season!

For more information on this modified character dining experience, visit our website here.

Over in EPCOT, the holiday festivities won’t begin until November 27, once the EPCOT International Food and Wine Fesitval ends. However, Disney has already announced the theme park will feature the following holiday promenades:

For more information on these promenades, visit our website here.

Inside the Magic will continue to update you as we see more of these holiday offerings throughout the theme parks. If you want to visit Disney World for the holidays, there’s still plenty of time! Book your magical holiday vacation by clicking here!

Want to stay up to date on all the holiday festivities at Disney World for 2020? Be sure to follow us on Instagram @itmnews or on Facebook.