Villains Calvacade Coming to Disney World This Fall! - Inside the Magic 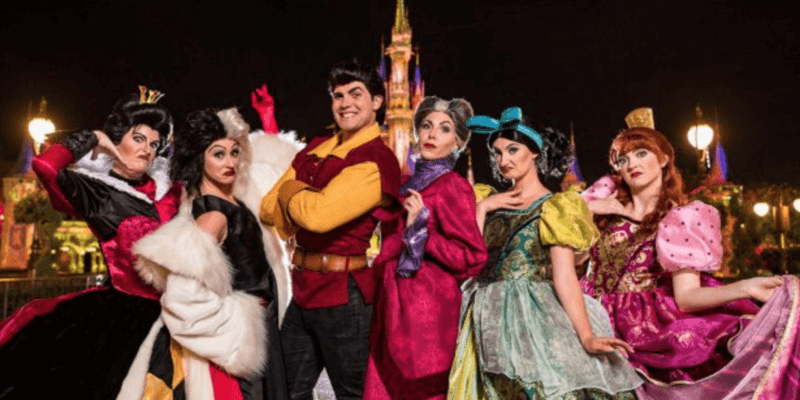 We have been hearing so much about the Christmas and Holiday offerings over at Walt Disney World recently, that we forgot about the spooky season we are currently in – Halloween!

Disney recently released all of the Halloween offerings that the parks would have after we found out that Mickeys Not-So-Scary Halloween Party was being canceled. Decorations will still fill Magic Kingdom, for the first time every adults could dress up as their favorite characters during park days and more!

Well Disney Parks Blog just released even more offerings and we can barely contain our excitement!

Throughout the day, special Halloween cavalcades will pop up on the parade route and head down Main Street, U.S.A. You could come across Mickey Mouse and his pals, all dressed up for the occasion in Boo-tiful Halloween costumes. On select days, you may even encounter a cavalcade of Disney Villains – from Gaston and Maleficent to Queen of Hearts and Jafar – creeping down the path, or a nightmarish procession featuring the Pumpkin King himself, Jack Skellington!

As another special treat for the Halloween season, we are thrilled (and chilled!) to welcome the iconic Dapper Dans back to Magic Kingdom Park, beginning September 20, performing as their undead alter egos The Cadaver Dans. You’ll be enchanted by a cappella performances from the Cadaver Dans when they emerge from their tombs.

The Halloween spirit is also in the air over at Disney’s Hollywood Studios, where Minnie’s Halloween Dine is set to return to Hollywood & Vine, beginning September 25. A monster feast will be served to your table, and favorite Disney friends will make special appearances in the restaurant. You can wave and snap photos of your hostess, Minnie Mouse, dressed as a happy witch. Goofy is coming as a spooky cowboy, with Mickey Mouse as a funny vampire, and his best pal, Pluto, gets into the act wearing a cute Halloween collar.

So although we may not get the Boo To You parade, it seems like these newly announced offerings may fill it’s place.

We are going to get costumed characters on cavalcades around Magic Kingdom park, as well as Villain cavalcades! In the past, to be able to see a full Villain cavalcade, you would usually have to pay to enter MNSSHP and now they are offering it for free. Check out our video below to see what it might look like from a Villains After Hours event!

As of September 20th we get our favorite dead acapella group back! The Dapper Dans really make the magic of Main Street, U.S.A. pop at the Magic Kingdom and we are glad they are coming back from the dead this Halloween season!

Retunring to Hollywood & Vine at Disney’s Hollywood Studio you can find Minnie and the gang in their Halloween costumes! Spend quality time with your favorite characters and snap some spooky photos.

Plan your Disney Halloween vacation today with us — just click here to get started!

Are you excited for Halloween at Disney? Let us know!

Comments Off on Villains Calvacade Coming to Disney World This Fall!