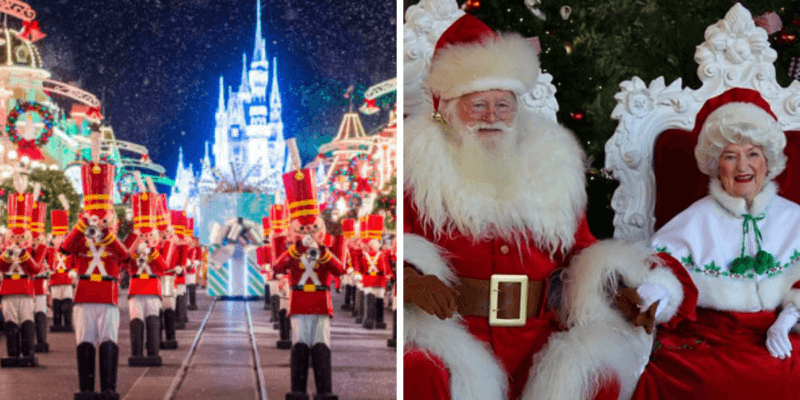 The holiday season is nearly here, and with it comes a modified celebration at the Walt Disney World Resort. Just like Halloween brought its own Not-So-Scary character cavalcades to Magic Kingdom Park, so too will Guests get to see other mini-parades with characters dressed in the spirit of the Christmas season. And with them, some very special character appearances!

Click here to book your holiday trip to WDW!

Related: Popular Disney Bar Will Transform for the Holiday Season

Character cavalcades at Magic Kingdom Park will take on a special holiday twist, with Christmas friends on festive floats in their holiday finest. Gingerbread Men? Check! Elves and Reindeer? Check, check! And, my personal favorite, the Toy Soldiers, will join the Main Street Philharmonic as they march through Magic Kingdom Park, bringing musical holiday cheer for all to hear.

Along with these cavalcades, the Dapper Dans sing Christmas Carols up and down Main Street on the horse-drawn trolley, and the Toy Soldiers march with the Main Street Philharmonic.

Click below to learn more and to see more cavalcade videos.

Over in EPCOT, the festivities will begin on November 27 and Disney has already announced that it will feature the following promenades:

As of now, we know that the Character Motorcades seen at Disney’s Hollywood Studios will also be themed for the Holidays. However, more details are still to come from that.

But Disney Parks Blog tells us,

Minnie Mouse will be hosting a yuletide gathering for all her friends at Hollywood & Vine at Disney’s Hollywood Studios starting Nov. 6. Santa Goofy will be there, along with Minnie and more in their holiday best.

Disney Parks also promised “Festive Flotillas” all along the waterways of Disney’s Animal Kingdom, and they did not disappoint!

“Donald’s Dino Bash Festive Flotilla” takes its seasonal celebration to the water, with character friends waving to everyone as they pass, and Chip ‘n’ Dale jingle through the jungle, bringing their own style of holiday flair to the river. The Discovery Island Drummers cruise along, too, entertaining guests on the shore with an energetic holiday beat. And when Santa Claus makes the trek to Disney’s Animal Kingdom, he’ll spread the joyous spirit of the season to all he sees along the way.

Santa Claus has arrived at Disney’s Animal Kingdom at Disney World for the holiday season!

We will continue to update our readers as more information comes to light.

If you’re trying to plan a last-minute holiday visit to the Walt Disney World Resort, our friends at Academy Travel are standing by to help you get the most magic out of your vacation as possible!

Comments Off on Characters Coming to Disney World for the Holidays