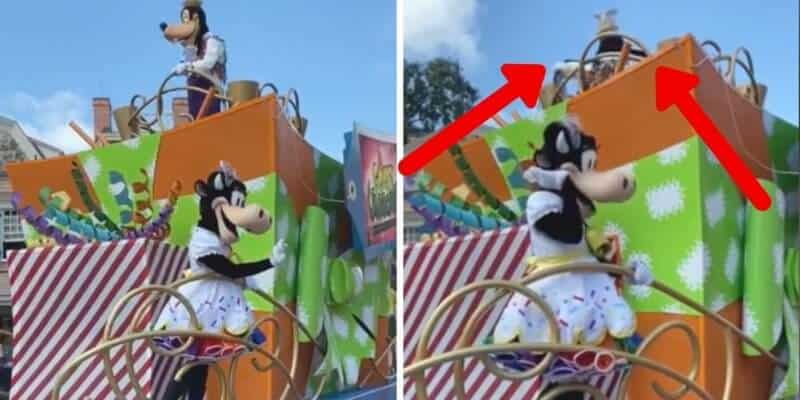 Magic Kingdom has been running various cavalcades ever since the park reopened in July. Some cavalcades include Mickey, Minnie, and Pluto while others feature Goofy, Max, and Clarabelle.

Well this afternoon, as Guests were watching the Goofy cavalcade, Guests noticed something happen to poor Goofy.

Amanda Konsitzke from Magical Vacation Planner shared these details as well as a video of the incident. Amanda told Inside the Magic that the cavalcade came to an unexpected stop at the bridge by Sleepy Hollow in between Liberty Square and Main Street U.S.A. and this is where you can clearly see Goofy lose his balance.

After seeing Goofy disappear for a few seconds, the cavalcade started back up again and continued on its route. Goofy removed his hat and gave a fellow Cast Member the motion that he was done. Disney stopped the cavalcade and Goofy waved goodbye to Guests as he was lowered into the float. We are sending well wishes and we hope Goofy is okay.

This isn’t the first incident that has occurred since the new cavalcades debuted at Magic Kingdom. During reopening day at Magic Kingdom, Merida’s horse, who Merida rides during the Disney Princess cavalcade which happens periodically throughout the day, got spooked by a balloon and had to be escorted off of Main Street USA. You can read more about this incident here.

For the fall season, Magic Kingdom has debuted a brand new Halloween Cavalcade that features Mickey, Minnie, Pluto, and other pals as they show off their favorite Halloween costumes. There is also Pooh’s Halloween Trolley, Disney Villains Cavalcade, and Jack’s Nightmare Cavalcade — all which run at varies times throughout the day.

Read More: When You Can See Each Halloween Cavalcade at Magic Kingdom