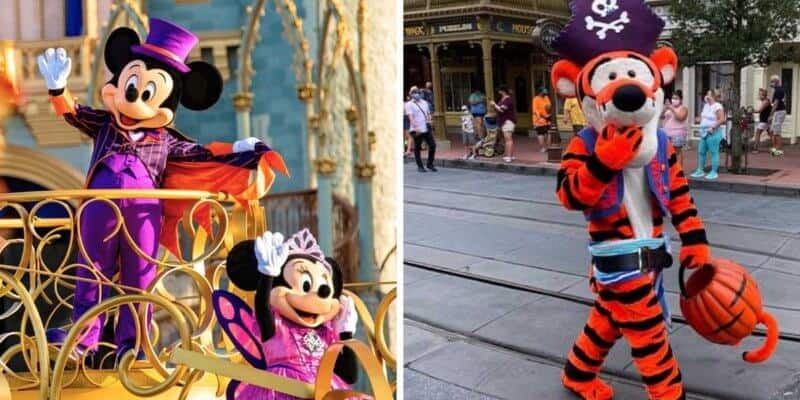 Despite Disney cancelling Mickey’s Not-So-Scary Halloween Party, Disney Parks is still bringing the fall fun for Guests visiting during September and October that we all can look forward to.

One of these fall activities include a brand new Halloween Cavalcade that will feature Mickey, Minnie, Pluto, and other pals as they show off their favorite Halloween costumes. There is also Pooh’s Halloween Trolley, Disney Villains Cavalcade, and Jack’s Nightmare Cavalcade — all which run at varies times throughout the day.

The cavalcades prior to the fall season at Disney Parks ran throughout the day, every day of the week — So this left many wondering if the same would be for these new Halloween Cavalcades. Well, Inside the Magic got confirmation!

Disney officials confirmed that Mickey’s Happy Halloween Cavalcade and Pooh’s Halloween Trolley will be presented every day. However, the Disney Villains Cavalcade is generally running 5 days throughout the week (typically Thursday through Monday) and Jack’s Nightmare Cavalcade will also be 5 days a week except it will run Saturday through Wednesday. Please note the schedule is subject to change.

These cavalcades will be running at varying times throughout the day, and the best way to know when they are coming is by asking a nearby Cast Member while you are visiting the park.

Another thing that Guests were curious about was if they could wear their Halloween costumes to the Disney park. During the Mickey’s Not-So-Scary Halloween Party, this is a huge plus for adults as they are able to dress up, which they typically can’t do during normal theme park hours. Well, Disney Parks just shared that for this year, adults can wear their Disney Halloween costumes during theme park hours on select days.

And of course, the food offerings at Mickey’s Not-So-Scary Halloween Party are a huge hit. Now, the Disney Park is bringing some of these items to the theme parks during normal park hours, including Hades Nachos, Halloween Cinnamon Rolls, and more!

Over at Disney’s Hollywood Studios, Minnie’s Halloween Dine is set to return to Hollywood & Vine, beginning September 25. You can read more about that here!

Are you excited to see Disney World celebrate fall season? Will you be catching one of these Halloween Cavalcades? Let us know in the comments.