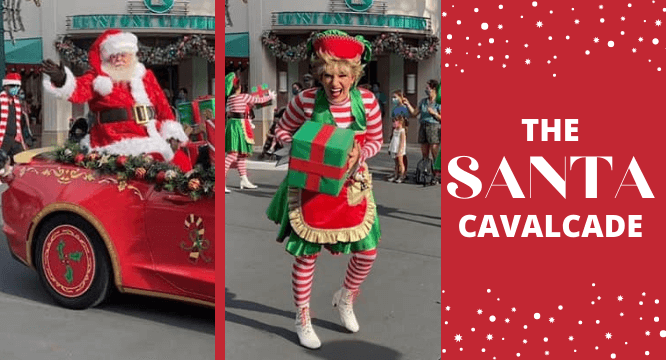 It’s time to be Merry! Santa Claus is making his annual stop at Walt Disney World Resort, but his trip looks a little different this year! You can visit Santa at a few places across the Disney theme parks, but if you want to see a swanky, old Hollywood style Santa parade this year, you’ll want to head to Disney’s Hollywood Studios!

“Guests visiting Disney’s Hollywood Studios get their own visit from Santa when he brings glitz and glamour to a motorcade down Hollywood Boulevard, led by an entourage of elves and riding in his red convertible packed with presents. And just in time for the holiday season, “For the First Time in Forever: A Frozen Sing-Along Celebration” adds a festive finale, featuring everyone’s favorite snowman, Olaf, and celebratory songs of the season.”

Festive skirted elves toss presents high in the air with others waiving ribbons as they walk down the center aisle of the park’s entrance. The main element of the Santa Cavalcade follows in a shiny red convertible laden with presents and Kris Kringle himself.

He’s extremely jolly and shouts messages of encouragement to Disney guests all along the way. Here’s the video Inside the Magic captured this week:

Character Cavalcades have taken the place of not only Magic Kingdom’s daytime parade, but Mickey’s Very Merry Christmas Party Parade, too. Reindeer, Candy Express, Goofy, “Festive Flotillas,” and more. Check them out in the Walt Disney World Parks across the Resort.

If you’re not visiting Santa in person this year, and instead opting for a handwritten letter by mail, be sure to remember him when he pops into your home this year. We know that Santa is a Mickey Mouse fan, the same as us, so we’re collecting this Gingerbread Mickey Milk and Cookies for Santa set. Complete with milk cup and cookies plate, it’s giving us vintage feels and cozy vibes to start our holiday. Surely Santa won’t mind if we eat one cookie… right?

Leave us a comment about watching the Santa Cavalcade at Disney’s Hollywood Studios!

Click here to book a WDW trip to experience the holidays at your happy place!