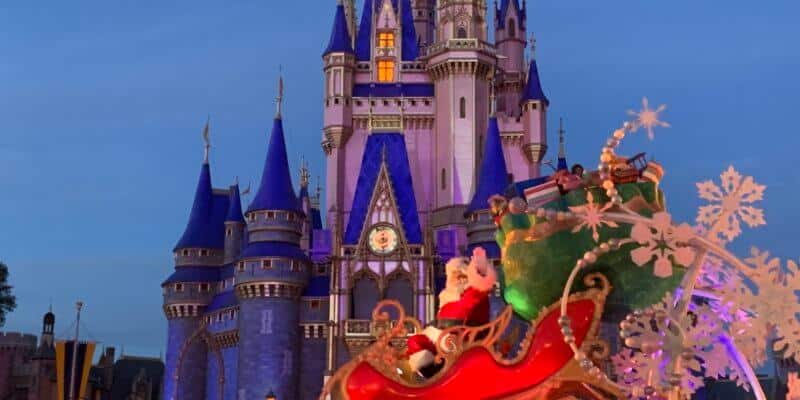 As the holiday season gets underway at the Walt Disney World Resort, we at Inside the Magic have confirmation on where exactly Santa Claus will still be making appearances and what that will be like!

Holiday magic will be in full force at the four theme parks and Disney Springs, and Santa Claus will make time for special pop-up appearances at each location, waving and exclaiming holiday wishes to all.

And we know where to find him at all four Disney theme parks and Disney Springs.

Below are all of the sighting opportunities by Disney World location. Please keep in mind that all sightings are socially distanced due to the enduring CDC health and safety guidelines.

Santa Claus is coming to town! A team of reindeer prance down the street, leading the way for Santa high on his sleigh, calling out to all the girls and boys.

Sure enough, high in his sleigh and accompanied by his eight tiny dancing reindeer and a handful of mischievous elves, Santa Claus has a very special cavalcade at Magic Kingdom park along the parade route, passing in front of Cinderella Castle and down Main Street, U.S.A.

Starting on November 27, Disney World Guests will get to see the Kris Kringle as they enjoy a modified version of EPCOT’s International Festival of the Holidays.

See Santa as he takes a grand tour around World Showcase in his horse-drawn carriage, calling out happy holiday wishes to all. (November 27 – December 24)

We will update our readers once we have pictures of Santa on his promenade.

According to the Walt Disney World Resort website, Guests will be able to:

Spot Santa Claus as he makes his way up Hollywood Boulevard in his candy-apple red convertible with a merry band of elves.

Which “sleigh” do you think is better for Santa?

See Santa Claus as he sails down the Discovery River to a jolly, world-beat holiday soundtrack.

Just as some of our other favorite characters boarded pontoons to greet Guests from the Discovery river, Santa has launched a very festive flotilla at Disney’s Animal Kingdom doing what he can to spread Christmas cheer to one and all.

According to the Walt Disney World Website, Santa and Mrs. Claus will be wishing Christmas wishes from a pontoon boat on Disney World’s Lake Buena Vista.

Called “Santa’s Winter Watercade,” the experience is described as the following:

“Santa and Mrs. Claus are soaking up the last bit of Florida sun before their big night, taking to Lake Buena Vista in a Winter Waterland of colorfully decorated pontoon boats, waving Christmas wishes to one and all.”

Guests will, no doubt, be able to catch a glimpse of the big man himself all along the Disney Springs waterfront from The BOATHOUSE and Jock Lindsey’s to over by the House of Blues. However, like all of the flotillas and cavalcades, there are no announced times set to prevent expectant crowds from forming and breaking social distancing.

Christmas festivities at Walt Disney World began on Friday, November 6, with the start of a modified celebration at Magic Kingdom Park with some of your favorite Disney characters.

Stay tuned with Inside the Magic for more Santa Claus news as it comes to light.

If you are planning a trip to Disney World over the holidays, our friends at Academy Travel are standing by to help you make this vacation the most magical yet! Click here to learn more and receive your free, no-obligation quote today!

What do you think about Disney’s modified Santa experiences? Let us know in the comments!

Comments Off on Confirmed: Where to See Santa Claus at Disney World!