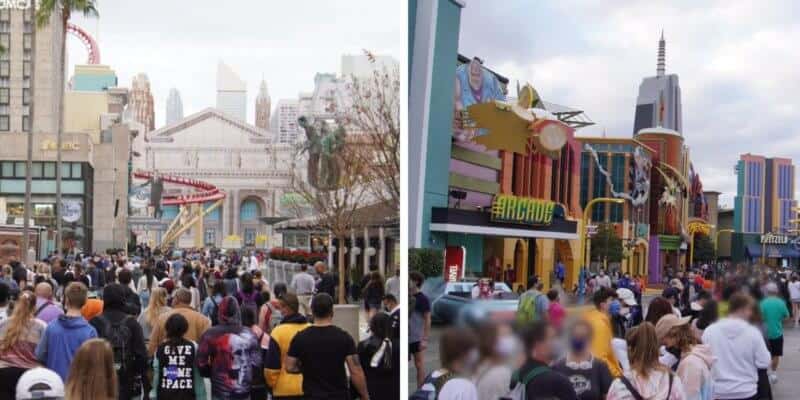 For the past week, Universal Orlando has been quickly reaching capacity with holiday crowds shortly after the parks open. Now, with New Year’s Eve around the corner — and for the first time this pandemic — Universal Studios and Universal’s Islands of Adventure have both hit capacity by 7:30 AM — 30 minutes before opening.

Twitter account, Bioreconstruct (@bioreconstruct), posted a photo from Universal Orlando Resort this morning at 7:43 AM of a sign that reads, “THEME PARKS AT CAPACITY”. The Tweet’s caption says:

Universal Orlando theme parks tagged at capacity by 7:30 am. 30 minutes before they open at 8. (Early entry began 7 am)

Universal Orlando theme parks tagged at capacity by 7:30am. 30 minutes before they open at 8. (Early entry began 7am) pic.twitter.com/87ST8ZcfJ3

Although it is clear that the capacity sign in the parking lot was posted far before 8:10 AM, considering the time it takes for guests to walk from the parking lot, through security, down into CityWalk, and then to either Universal Orlando or Universal’s Islands of Adventure, it makes sense that there would be a delay between when the lot fills and the theme parks are actually at their current capacity limitations.

From Universal’s Tweet, we can also see that the park is hoping to reopen to additional guests in the afternoon. However, if you are looking to visit the parks, please note that entry is not guaranteed. Not only is Universal working on a first-come-first-serve basis, but there is typically a line for the entry that is created once the parks reach capacity — meaning that even if you show up, there could be many other guests in line in front of you. If you want to avoid disappointment, checking the Universal Orlando app frequently will have you updated on the capacity status of both parks, as well as the capacity hotline which is the most accurate and up to date information in terms of capacity limits and when they are lifted (407-817-8317).

Bioreconstruct (@bioreconstruct) also posted the line for The Amazing Adventures of Spider-Man before the park opening at 7:50 AM, and we can see it was already quite massive at that time.

Line for Spiderman at approx 7:50. pic.twitter.com/bZW66eV1EQ

We can also see that the Universal Studios park allowed a few more guests into the park past 8:10 AM, however, this may have been limited to resort guests only, as they have guaranteed admission into the theme parks. Universal also did not announce that the parks were no longer at capacity, which they typically do via Twitter.

It seems that guests are arriving earlier and earlier each day this holiday season, which is likely due to the fact that guests want to guarantee their entry to the parks. With the theme parks filling up within minutes, it seems that going for early entry before the parks officially opening is the best option to beat the rush.

Do you think that Universal Orlando needs to increase capacity? Will this trend continue after the holiday season? Let us know your thoughts below in the comments!