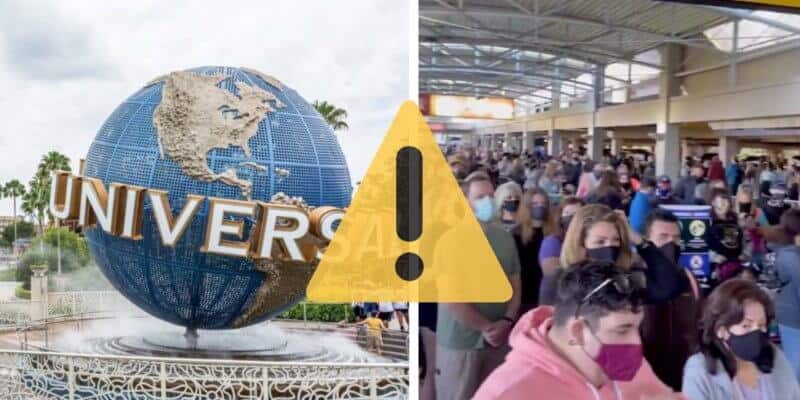 Lately, Universal Orlando has seen major crowds, with Universal Studios and Universal’s Islands of Adventure hitting capacity in as low as 32 minutes. Unlike Disney World, there is no reservation system at Universal Orlando, meaning that any guest can wake up in the morning and try their luck at entering the theme parks. Although this still allows guests to make last-minute decisions to head to the theme parks, would a reservation system be better?

Before we begin, it is important to note that Universal Orlando never opened with a reservation system and instead operates on a first-come-first-serve basis. Although Universal Orlando never spoke out on why they did not want to open with a reservation system, we know that Universal Hollywood is against the idea. As the California theme park remains closed for now, Governor Newsom released theme park reopening guidelines that would require guests to make reservations to enter the parks, and Universal Hollywood did not agree with the idea, stating, “It makes no sense.”

In order to enter either Universal Studios or Islands of Adventure, guests must go through the same parking garage and entryway that is used for CityWalk, walk through CityWalk, and then enter the park. The important thing to note about this is that this means every guest, for either theme park or the shopping and dining area of Universal, is going through the same security checkpoint. This can create massive lines, considering guests are showing up to go to a park that may already be at capacity, and these guests are still able to enter Universal Orlando property since CityWalk is open to guests. This means that, even as the theme parks are hitting capacity, huge lines can build up outside the theme parks, creating issues with crowding and social distancing.

Therefore, although Disney World often hits capacity with its reservation system, the groups of people are not all being funneled through the same entrance to get to the theme parks or Disney Springs, and only those who have the opportunity to enter the park that day show up. In the case of Universal, we see many hopeful guests who attempt to enter as others leave — meaning the number of people visiting the parks in a given day is greater than Disney, which keeps either the same Guests all day, or loses them, but never adds more (until, of course, Park Hopping returns in 2021).

Considering Universal Orlando is now hitting capacity in under one hour (or within just a few hours of the theme parks opening), with many more guests still showing up wanting to get in, crowds have become a concern. Only a day ago we saw a Universal Orlando guest (@RIPcotCenter) take to social media to tell others to not go to Universal after showing the line to enter CityWalk, the single entrance we previously discussed to enter Universal Orlando Resort.

Although guests can check capacity limits before arriving, when you have theme parks that fill up in minutes, many guests may assume that showing up an hour after opening will be fine — even when it’s not. The uncertainty of whether a hopeful visitor should wait until they can enter the park or simply leave can lead to over-crowding near the entrance, as evidenced in the video above.

Also, we know that Universal, like Disney World, silently increases capacity. After seeing the demand and long lines of others trying to enter, increasing capacity would be very tempting for the park as it would be a lucrative decision. Considering Governor DeSantis has allowed theme parks to operate and run as they see fit, not having a reservation system can allow Universal to technically admit as many guests as they would like and change capacity limits whenever they want, assuming the parks are following what the Florida Gov. has allowed.

So, why wouldn’t Universal want to use a reservation system?

Considering the lack of social distancing that is being spread all over social media from the Universal theme park guests, it is interesting to look at why Universal would not want to use a reservation system that would control the crowding and create a safer image in terms of visiting their theme parks.

Personally, I think the main reason here is financial gain. As we previously mentioned, Universal allowing guests to rotate in and out of their parks only means more people can visit the theme parks on any given day. This of course means more tickets being purchased, more food being eaten, more people shopping in the stores, and more money being spent. Also, it allows tourists or locals who were not able to visit Disney World because they did not have a theme park reservation the opportunity to still visit a theme park for the day.

That added foot traffic and guest count, however, does add to the possibility of spreading COVID-19. If Universal Orlando does not appear to be emphasizing crowd control as much, guests have more free reign within the theme parks and perhaps not priotize physical distancing as much. Photos depicting guests standing very close to each other, almost shoulder-to-shoulder, show that social distancing is nearly impossible when clusters of people are showing up to enter a theme park that already hit capacity.

Considering Universal has not changed their stance on this subject since reopening, it is unlikely that a reservation system will ever be implemented as tourism in Orlando continues to increase amid the pandemic. That being said, Universal does enforce face coverings for all guests, and the park does have other safety measures in place, including sanitization. You can read more on their website here.

Do you think Universal Orlando should have a reservation system? Or do you like the first come first serve option in place?