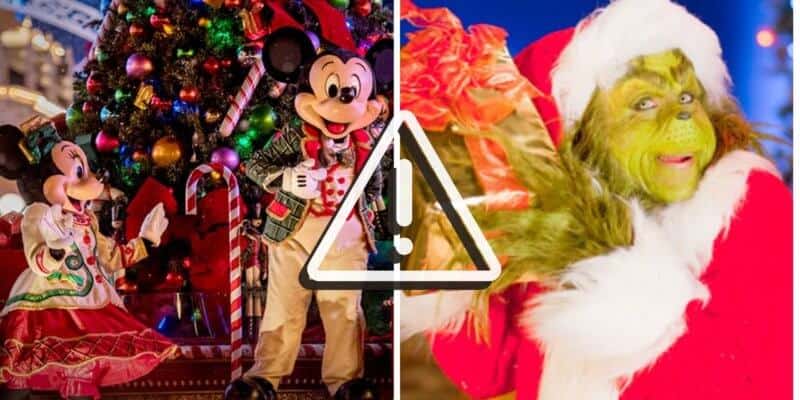 Going into the holiday season, a time where the Orlando theme parks are typically bursting with Guests, during a pandemic has been different than what we are used to. Although Christmas is still on its way, both Universal Orlando Resort and Disney World are operating at a limited capacity and cannot take in the Guest count they are used to during this time of year. Aside from that, due to the pandemic, many visitors are forgoing their holiday vacation plans until it is safer to travel — so guessing how busy Disney and Universal were going to be this Christmas has been a toss-up. Now, we have our answer.

The parks are packed.

And by packed, we mean they are hitting their reduced capacity limits. During the Christmas season, Universal and Disney are hitting their limit more often (and a lot faster) than normal. If we take a look at Universal Orlando, a theme park resort comprised of Universal Studios and Islands of Adventure, we can see that both parks have been hitting capacity often. However, typically this was happening on weekends. Universal even issued a notice to their Annual Passholders asking them to come on weekdays to help mitigate the demand and spread Guests over to their lower-attendance days. Now, during Christmas week, weekdays are no longer “slow.”

Universal is hitting capacity faster than it ever has on weekends, with today’s limit being hit in just about 2 hours after park opening — and it’s a Tuesday.

Please note that when this happens, you still have a chance at getting in the park! As Guests leave Universal, the theme parks will allow more Guests to enter, since the Universal theme parks are not using a reservation system. However, you will be playing a little bit of a waiting game until you are able to do actually enter. If you want to guarantee entry this week to check out the holidays at the Wizarding World of Harry Potter, or just ride some coasters, Universal Studios and Islands of Adventure operating statuses are always on the Universal Orlando app, or you can call the capacity hotline (407-817-8317) to avoid disappointment — but showing up at park open (8:00 AM) is likely your best bet if you want to make sure you can get in this week.

Walt Disney World Resort, on the other hand, implements the Disney Park Pass reservation system that requires you to prebook your park visit. The Disney Park Pass system often hits capacity quickly, and now, it’s filling up even faster. Magic Kingdom and Disney’s Hollywood Studios are both already at capacity on Christmas Eve and Christmas Day. Additionally, Hollywood Studios is at capacity every day prior. EPCOT and Animal Kingdom are still possible to attend this week, however, that availability is constantly changing, so we really recommend making your reservation ASAP, if you want to visit within the next week.

Plus, even though Disney World and Universal Orlando are hitting capacity, both parks have silently raised capacity limits already, so Guest demand could tempt them to do it again. Of course, neither company has publicly stated that they have increased capacity higher than 35% yet, but looking into past actions, I personally wouldn’t rule out a slight increase.

Although the pandemic has created a different kind of Christmas season for Universal Orlando and Disney World, it seems Guests are willing to take the modified experience and enjoy the magic both resorts have to offer! Plus, looking at Cinderella Castle with holiday projections or walking around Seuss Landing and spotting The Grinch are priceless offerings that make the holiday theme park visit worth it and memorable.

Will you be at Universal Orlando or Disney World this holiday season?

It’s not too late to book a trip — click here to work with Academy Travel!