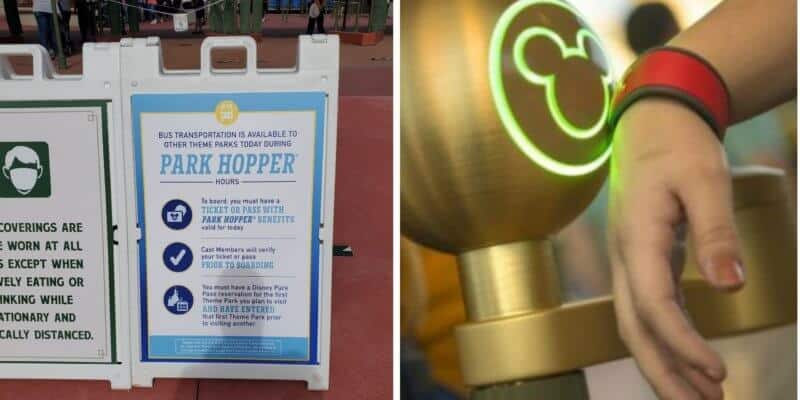 As Disney World has been navigating its way through the pandemic, many offerings have been reduced to allow for Guest safety. Now, as of January 1, Park Hopping is finally returning to Disney World — but there are going to be new rules that you may not be used to.

Typically, Guests would Park Hop from Magic Kingdom to Disney’s Animal Kingdom, Disney’s Hollywood Studios to EPCOT — or really, any combination of their choosing, and were able to do so whenever they wanted (so long as the Guest had an applicable Annual Pass or Park Hopper ticket). Now, as Park Hopping returns to Disney World, there are changes that have come along with it.

We originally knew that Park Hopping would only commence after 2:00 PM, but now Disney has released new signage that signifies there are more rules to Park Hopping at the moment. Monday Morning Monorail Podcast (@MorningMonorail) Tweeted a photo of the new Park Hopper signs that are out in front of the parks which reads the requirements for Park Hopping via Disney transportation.

To board, you must have a ticket or pass with Park Hopper benefits valid for today.

Cast Members will verify your ticket or pass prior to boarding.

Previously, Guests were able to hop on a Disney bus at EPCOT (or any park) and head to whatever park they wanted, no questions asked. Now, it is clear Disney is making sure that only those with valid entry are transporting to alternate parks. Also, Disney is already troubleshooting what could have been an issue with Guests who may have looked to find a loophole in the Disney Park Pass system.

Considering Disney Park Pass reservations sell out for certain parks faster than others, Disney is making sure that Guests do not just book a reservation for a park with availability, and then use Park Hopping to go to the park that showed no availability right away. Guests will have to enter the park they have the Disney Park Pass reservation for if they want to be eligible to enter another park after 2:00 PM using the Park Hopper option.

Guests are also allowed to enter all 4 Disney parks in one day when Park Hopping! Personally. this reporter has been wondering if Disney would constrict Park Hopping to 1 park, or allow Guests to try their best to visit them all. Now, we can see that Scott Gustin (@ScottGustin) has confirmed that as long as there are no capacity issues, Guests are able to enter all 4 parks in one day.

Update: Just talked to a few people who have already been to 4 parks today. No limits on hopping as long as no capacity issues. Enjoy it! ?? https://t.co/XBUajCGrAK

Are you excited that Park Hopping is back at Disney World? Are you okay with the new rules or do you think it will affect the Park Hopping experience? Let us know!