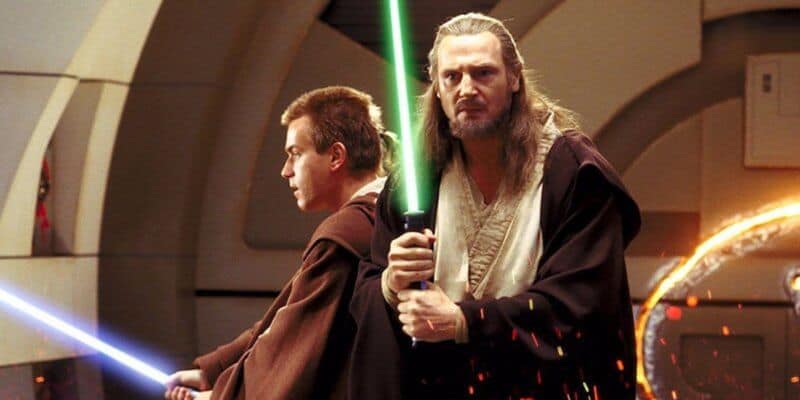 For Star Wars fans, however, Neeson will always be remembered most for his portrayal of Jedi Qui-Gon Jinn in the prequel trilogy. Neeson played Obi-Wan Kenobi’s (Ewan McGregor) Jedi Master in Star Wars: Episode I – The Phantom Menace (1999), in which he ultimately dies during a lightsaber battle with Darth Maul (Ray Park).

…a venerable if maverick Jedi Master who lived during the last years of the Republic Era. He was a wise and well-respected member of the Jedi Order, and was offered a seat on the Jedi Council, but chose to reject and follow his own path. Adhering to a philosophy centered around the Living Force, Jinn strove to follow the will of the Force even when his actions conflicted with the wishes of the High Council. After encountering Anakin Skywalker, Jinn brought him to the Jedi Temple on Coruscant, convinced he had found the Chosen One.

As Jinn lay dying, he beseeched Kenobi to bring balance back to the Force by taking young Anakin Skywalker under his wing.

Now, as the Star Wars universe has begun to rapidly expand with a number of new television series — including 11 confirmed Disney+ streaming shows — and three feature films, many in the Star Wars fan community have begun to wonder if Qui-Gon Jinn could ever return to the franchise.

Although Neeson had previously shot down the idea of a Star Wars return saying he had “no desire” to come back, he recently changed his tune and indicated he would pick-up the lightsaber again. Per ComicBook.com’s coverage:

In a new interview with Collider, Qui-Gon Jinn actor Liam Neeson coyly addressed the possibility of his return in Obi-Wan Kenobi [OBI-WAN KENOBI: An Original Series] — and revealed that he wouldn’t be opposed to the idea.

“I’ll be honest with you: I haven’t heard that at all,” Neeson initially said of the rumor of him returning in the series, before later adding, “Sure, I’d be up for that, yeah.”

The actor would, however, have to return in either a flashback scene or as a Force Ghost guiding Kenobi through the galaxy as a result of his death early in the prequel trilogy — this mini-series is set to take place approximately a decade after Star Wars: Episode III – Revenge of the Sith (2005), so Jinn has been gone for quite some time.

Deborah Chow’s (The Mandalorian) long-awaited OBI-WAN KENOBI: An Original Series has faced numerous coronavirus production delays, but is finally set to begin shooting this month in the United Kingdom. Both Ewan McGregor and Hayden Christensen are set to reprise their Star Wars prequel roles as Obi-Wan Kenobi and Anakin Skywalker/Darth Vader, respectively.

But wait, what’s this about retirement?

Oddly, on the heels of saying he would return to Star Wars, 68-year-old Neeson — who was knighted in the year 2000 — shared that he is retiring from action films altogether.

While the Star Wars universe isn’t exactly a stereotypical action franchise, it certainly does involve a number of action sequences — though, it is, of course, possible that Neeson would simply use a stunt double for these scenes.

‘There’s a couple more I’m going to do this year – hopefully, COVID allowing us – there’s a couple in the pipeline and, then I think that will probably be it. Well, unless I’m on a [walker] or something.’

Neeson also recently shared that he would be willing to work on Patty Jenkins’s upcoming Wonder Woman 3 action film project, so it remains to be seen how his retirement from the genre actually plays out.

Jenkins, for her part, is also set to direct the next Star Wars theatrical movie, Star Wars: Rogue Squadron (2023). Academy Award nominee Neeson has no connection to the film, however.

Would you like to see Liam Neeson return to Star Wars as Qui-Gon Jinn at some point?