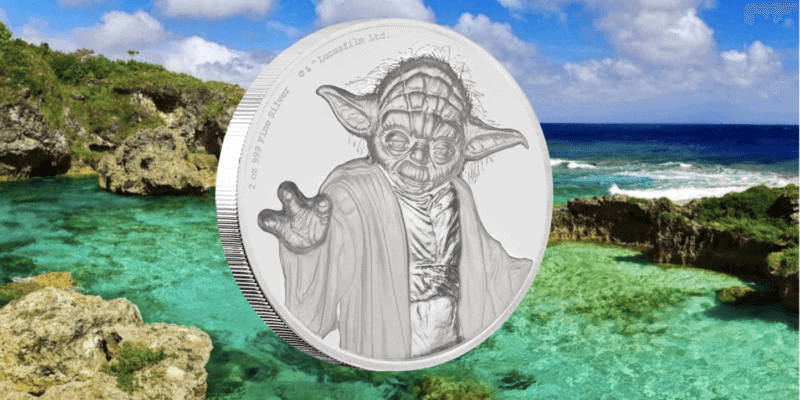 If you’ve never heard of the small island nation of Niue — which is associated with nearby New Zealand’s currency mints (this will be important momentarily) — you aren’t alone.

Related: How Much Money is in the Fountains at Disney World?

The country, whose official tourism website features the following description, offers a slice of untouched paradise to travelers from around the world:

Niue is a Pacific Island paradise like no other, one of the smallest countries, and one of the largest raised coral atolls on earth.

Niue is a place where it’s normal for complete strangers to wave at each other, all the time. It’s a place where nature hasn’t been broken… and things are ‘the way they used to be’. Come and enjoy our beautiful little island.

In a recent TIME magazine Star Wars special edition, a short true and false quiz with franchise trivia questions was featured. Below, you’ll see the question and answer to #7 on TIME’s list.

Question: You can exchange Star Wars coins as legal currency.

Answer: TRUE: But you might not want to. The small South Pacific nation of Niue, which is associated with nearby New Zealand, mints coins with Star Wars characters on one side and Queen Elizabeth II on the other. While you could buy your lunch with a silver $5 Darth Vader coin, the retail value of the item is $185.

Related: ‘Star Wars’ Actor Told James Dean He Would Die a Week Before It Happened

Below, we take a look at some highlights from Niue’s actual Star Wars currency series.

Priced at an astounding $2,900 USD, this eye-catching gold Death Star coin features the following description of the Galactic Empire’s most intense piece of weaponry:

The coin arrives in a Star Wars™ themed box. Inside there’s a wooden case designed to allow this impressive coin to be angled for display. Each coin has a Certificate of Authenticity confirming it as limited-edition made from pure gold.

My personal favorite item in the Star Wars currency collection is this Han Solo and Chewbacca one-dollar note featuring an iconic scene from Star Wars: Episode IV – A New Hope (1977). Priced at a mere $49.95, the official description reads:

The heroic, frustrating and lovable pair of Han Solo™ and Chewbacca™ are inseparable again on their own Star Wars: A New Hope Silver Coin Note.

The fifth in the series, this note is made from 5g of pure silver, and coloured and engraved with images of the two characters ready to defend themselves. The note also features the movie’s logo.

The obverse contains the Ian Rank-Broadley effigy of Her Majesty Queen Elizabeth II and is legal tender in Niue.

Each silver coin note is printed with its unique number in the mintage and is presented in a protective sleeve which includes details of the note’s authenticity.

Fans of the Star Wars sequel trilogy — which officially ended the Skywalker Saga — will want to get their hands on this one-dollar note featuring Rey (Daisy Ridley). Also priced at $49.95, the official description reads:

This first striking 5g pure silver coin note in the Star Wars: The Force Awakens Collection features a close up coloured image of Rey™ and a detailed engraving of the scene featuring Rey with her speedster, the movie’s logo and the Rebel AllianceTM starbird. The unique number in the mintage is also printed on to the note.

A Star Wars Collector’s Album is included with purchase. Inside a protective cover, this hardcover album includes a page for each of the seven-coin notes in the collection, which will include Rey, Finn™, Leia Organa™ & Han Solo™, Kylo Ren™, Poe Dameron™, BB-8™, and the Stormtroopers™. The album is Star Wars themed, with each page designed to complement the corresponding note – including a brief summary of the character’s role in the film.

It’s almost hard to believe this five-dollar Darth Vader helmet coin is legal tender, but it is! Priced at $199, the official description of this ode to the dark side of the Force reads:

Ultra High Relief 2oz pure silver coin replicates Darth Vader™’s helmet, from Star Wars: Return of the Jedi, in stunning detail. Unlike most collectible coins, this one follows the shape of the intimidating helmet and uses an Ultra High Relief Minting technique to add more depth to the design. Impressive. Most impressive!

The coin is nestled in black velvet inside a high-quality Star Wars branded coin case – perfectly angled to display the 3D aesthetic of the coin. The stylised [stylized] Certificate of Authenticity also sits within the coin case. Along with the Star Wars themed outer box, this coin truly is a unique collector’s item.

While you may not be able to buy an actual Imperial credit or Batuuan spira to spend when you visit the Outer Rim at Star Wars: Galaxy‘s Edge, this Star Wars coin collection is still an amazing way for any Star Wars fan to expand his or her personal Star Wars universe.

Whether you choose to spend the coolest credits in the galaxy or save them as Star Wars collector’s items, don’t miss the full line of Star Wars currency available in Niue — there are even Chibi coins!